As we wait patiently for football to return, now is a good time to look back and reminisce about simpler times.

The decisive result that took Villa ever closer to their last league title was beating the vanguard of English football, Brian Clough's Nottingham Forest.

A penalty from Gordan Cowans and a strike on the stroke of half-time by club legend Peter Withe would see Forest off.

Incredibly, the Villains won the league this campaign by only using 14 players the whole season.

On Dennis Mortimer's birthday, relive the night when he lifted the European Cup as Aston Villa captain! 朗#AVFC pic.twitter.com/sMdzl46VVf

"When I went to pick the trophy up I was expecting a Super Cup but he handed me a plank of wood! I said: 'Is that for me to stick on the wall or something?'" 

Ken McNaught talks through some of the defining images of his career...#AVFC

A star-studded Barcelona side came to Villa Park holding a slender lead in the European Super Cup after beating the Villains 1-0 at Camp Nou.

A cagey and tough match followed and it looked as if the trophy might be heading back to Catalonia. Step forward, Gary Shaw.

In the 80th minute, a botched free-kick routine ended up working very well and the English midfielder fired home.

The game went to extra-time, and with momentum on the Villa's side, a five-minute double salvo from Gordon Cowans and Ken McNaught sealed the club's second European success.

​League Cup triumphs are a speciality for ​Villa - the club has won the competition five times. In 1994, they clashed against the champions of England and their title rivals from a season before.

Some clubs have an affinity with competitions - Villa really like the League Cup. The club's success in 1996 was the clubs' second titles in three seasons.

This side was much changed from the 1994 triumph. It was a more youthful, vibrant team including Ugo Ehiogu, Gareth Southgate and a potent Dwight Yorke.

A conclusive result followed as ​Leeds couldn't deal with the brilliant Yorke and his partnership with Savo Milosevic. 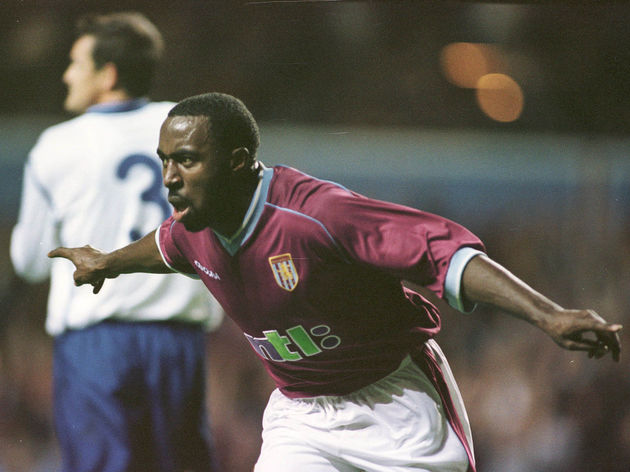 Ah, the Intertoto Cup. That old competition that had three winners who gained entry to the UEFA Cup, starting in July and finishing in August. Before you say something you regret - no, it was not a pre-season tournament akin to the Emirates Cup. It was serious stuff.

Villa won it in 2001 alongside Shearer's Newcastle and Ronaldinho's Paris Saint-Germain by beating Slaven Belupo, Rennes and finally, Basel, to bring home the trophy. A small trophy that looked like an Under-12s cup, but a trophy nonetheless.

After drawing 1-1 in Basel, club icon Juan Pablo Angel notched in a brace, with future England international Darius Vassell and David Ginola getting the others to send the Swiss club packing. The kits were much better back then. Last season's playoff triumph is sure to give every Villa fan chills. Watching local lads Dean Smith and Jack Grealish hoist silverware aloft to take their club back to the big time is a story that isn't often seen in globalised, modern football.

In the final, the club faced off against Frank Lampard's Derby County and it's safe to say the Villains were up against it. The Rams were the country's darlings, fresh after beating Marcelo Bielsa's Leeds in a brilliant semi-final.