For those whose clubs have made the journey to the final, there’s a lingering sense of anticipation - of hope - that this year might be the one. Even if your club hasn’t managed to make it to those elusive pearly gates, just being able to bask in the wholly unique atmosphere is an incredible experience.

We were lucky enough to be invited along to the Carabao Cup final as special guests of Sky Sports to witness Aston Villa take on Manchester City at Wembley in February; north London’s very own David vs Goliath.

For anyone who has never been to Wembley before, you tend to arrive at Wembley Park tube station and triumphantly stride up Wembley Way in the shadow of the striking arch of the rebuilt stadium. You’ll mix with fans from the opposition, exchange a few chants and then you’re in. This time however, we had been instructed to head to the underbelly of the stadium where the team busses were set to arrive and TV crews would be setting up. After picking up our accreditation we passed through the obligatory security checks and made our way through the car parks under the stadium and out into the gargantuan bowl of an arena. There’s something eerily beautiful about football stadiums when they’re empty. You can almost feel the weight of matches gone by and residual electric energy of the crowd. Hainesy (​@BenHainess) was our presenter for the day and managed to grab a quick chat with Micah Richards, Jamie Redknapp, Laura Woods and Martin Tyler before we entered the tunnel to witness the teams arriving and eavesdrop on the managers' pre-match chat. The players emerged from the tunnel, the national anthem blared and it was time to play. We ducked into the press box to upload what we’d captured so far to various social channels (which you can ​watch here) and settled in behind the Villa fans. Through raised arms and hands clasped despairingly to foreheads, we watched as City took a two-goal lead through Sergio Aguero and Rodri. Inevitable. What was less inevitable though, was Villa’s goal shortly before half-time. Mbwana Samatta powering in a header after John Stones had slipped. Limbs. Game on.

At half-time we made a mad dash to the Sky Sports studio high up near the towering tips of Wembley. What you realise when you’re trying to get around the inside of a football stadium that size is how segmented they are; it took us three separate lift rides and some polite persuasion to get to the level we needed. We burst into the studio as the second half kicked off to find Tom Heaton and Micah Richards watching in silence. We exchanged a quick thumbs up - nothing more; it’s cup final day. We journeyed back to the press box to watch the final embers of the game. The anguish among the Villa faithful was palpable, as City popped the ball around them calmly, slowly sucking the life out of the game. But in football, you always get one last chance.

Into stoppage-time we went and Villa won a corner. The ball was whipped in towards Bjorn Engels who rose like a salmon climbing an Oregon river to power the ball towards the City goal. Bravo managed to get a hand to it and pushed it onto the post before a City defender bashed it away. Game over. We rushed down to the pitch to watch Manchester City raise the Carabao Cup for a third consecutive year. A routine win to add to the trophy collection. The blue half of the stadium stuck around to sing Blue Moon while those of a Burgundy persuasion moved swiftly towards the exits. 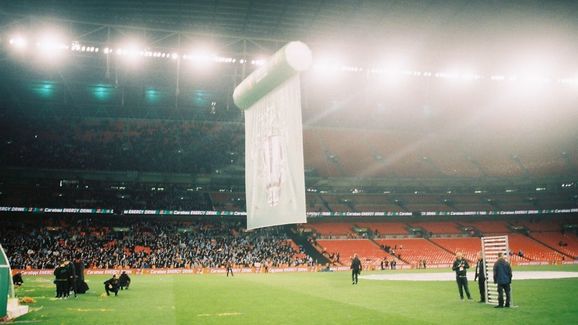 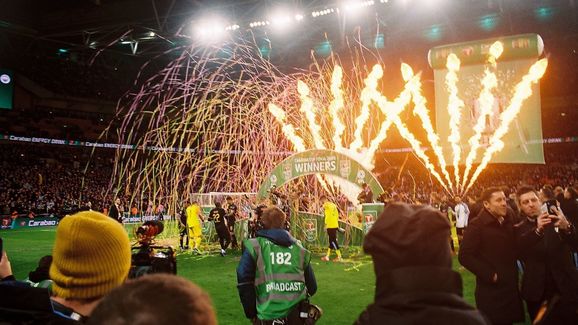 Then it was all over, the stadium was empty again and another cup final had been decided. At the time we weren’t to know that it might be the only cup final that would be played this season, but given the current situation it just might be. Photos taken by ​Hunter Godson on a Canon A1 - film ain't dead.