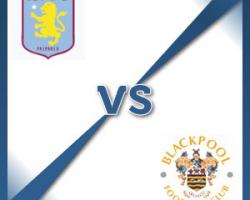 Aston Villa V Blackpool - view commentary, squad, and statistics of the game live.Lambert wary of another upsetPaul Lambert has warned Aston Villa against another FA Cup upset as he aims to avoid more embarrassment against lower-league opposition.Villa host Sky Bet Championship strugglers Blackpool in the third round on Sunday.The visitors are bottom of the Championship, but Villa can take nothing for granted having lost to Sky Bet League One side Leyton Orient in the Capital One Cup this season, as well as being dumped out of the FA Cup by Sheffield United last term

Villa have won just twice in their last 16 Barclays Premier League games and just twice at home this season.Lambert said: "We have to be wary, they have nothing to lose

It's a tough game

You would think they would come and give it a game."I've spoken to Lee (Clark, Blackpool boss) a few times and know Alan Thompson who was a good friend at Celtic

We have to make sure we get through it."Villa are the lowest scorers in the top four divisions with just 11 goals in 20 league matches while Blackpool have netted just 18 times.Villa were jeered off after their stalemate with Cyrstal Palace on New Year's Day, a second straight home 0-0 draw, but Lambert insisted the goals will come for the team and striker Christian Benteke."Christian needs to keep going, in the last four or five games he has always had a chance and it will come," he said

"If he keeps persevering it will come."We're playing out through the back and just need to take the chance

The stats show we are creating more and we just have to finish it off."We've only lost two games in 10 and our defensive record is really strong

There's loads of things which are progressing but when they get the chance we have to take it."Lambert is set to make changes against the Tangerines with young midfielder Jack Grealish expected to start."There's a chance Jack could start Sunday," Lambert said

It was a different type of game, so we'll see."Villa are without the suspended Fabian Delph as he sits out the second of a three-game ban.Ron Vlaar is also out after he limped off on Thursday with a knee injury

The skipper had a scan on Friday with Villa hopeful it is not too serious.Ashley Westwood and Nathan Baker (both knee) are out along with long-term injury victim Libor Kozak (broken leg)Jack Grealish, Joe Cole, Matt Lowton and Shay Given could all start for Paul Lambert's side.Blackpool have been hit by loanees returning to their parent clubs.Winger Jacob Murphy, who apologised earlier this week when a social media image of him mocking the Seasiders' plight leaked online, unsurprisingly returned to Norwich in the aftermath of an internal investigation.The Seasiders have also lost Donervon Daniels, John Lundstrum and Stuart O'Keefe to their parent clubs since their last game on December 28 against Rotherham.Striker Ishmael Miller is at least back from suspension while Steven Davies (neck) and Nyron Nosworthy (groin) could at least come off a lengthy injury list which includes Costa Rica international Jose Miguel Cubero (ankle), Gary MacKenzie (Achilles) and Tom Barkhuizen (broken arm)