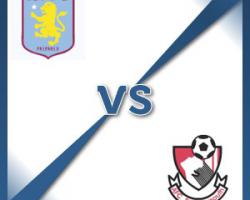 Aston Villa V Bournemouth - view commentary, squad, and statistics of the game live.Gil in line for full Villa debutCarles Gil could make his full Aston Villa debut when they host Bournemouth in the FA Cup fourth round on Sunday.The Spanish midfielder made a bright second-half cameo in last week's 2-0 defeat to Liverpool after signing from Valencia.Gabby Agbonlahor and Joe Cole (both hamstring) are doubts and Ron Vlaar (knee), Philippe Senderos (calf) and Libor Kozak (broken leg) are out, but Ciaran Clark is back from suspension.Villa are looking to progress in the cup after being dumped out by Sheffield United in the third round last season.Bournemouth have scored 57 league goals compared to Villa's 11 as the country's leading scorers go to the lowest.And manager Paul Lambert has underlined the importance of the cup after his comments about the competition being a "distraction" were misunderstood last season.He said: "I got pilloried last year."The FA Cup is vital to this football club and we will go and try and win it

We have to have a cup run."If we can get a good cup run it is then in the memory for everyone

We would love to go to Wembley."We will go as strong as we can to win the game

I have rarely picked a weakened team."Bournemouth defender Adam Smith insists their promotion push will not distract them from their fourth-round clash.Eddie Howe's men are a point ahead of Middlesbrough at the top of the Championship table, despite losing 1-0 to Leeds on Tuesday.Smith believes Bournemouth can "beat anyone on their day" and vowed they would head into the match without fear of the opposition."Things are going well at the minute," he told the Football Association website

"The team spirit is very good and we're playing some good football."The lads won't be scared going into this game

We are just looking forward to testing ourselves against another top side."Hopefully we can beat Villa and then go on a bit of a run, like we did in the League Cup

We are looking to go on another good run and we'll see where that takes us."Bournemouth knocked out Premier League side West Brom during their impressive Capital One Cup run, which was eventually halted by Liverpool in the quarter-finals.The experience of taking a major scalp is something which Smith believes can give them the extra self-confidence needed to progress this weekend."Villa probably aren't doing as well as they would like, but they have got plenty of quality and we know it will be tough," he added."But if we can keep their big players quiet I'm sure we can get a good result and if we play our football I'm sure we'll have a good chance."Manager Howe could make a couple of changes for their second match this week.Number one goalkeeper Artur Boruc made his first start at Elland Road since recovering from a neck injury and will carry on between the sticks.Midfielder Dan Gosling, who came on for the last half an hour in midweek, may come into contention if Howe decides to flood the midfield.That means Brett Pittman could make way, with top scorer Callum Wilson set to lead the line