Though they only achieved promotion back to the Premier League last season, Aston Villa have been a constant presence in the top-flight for many years before relegation to the Championship in 2016.

It's easy to forget that this club was once a regular participant in European football, often due to the collective success of a team who relied on a wide spread of contributors to achieve high placing finishes in the league table. While the 2019/20 cohort are fighting for league survival this season, maybe the players can take inspiration from those who came before them and dared to take on the so-called 'Big Six' in the club's prime.

Here, 90min presents a trip down memory lane, where we look back at Villa's Premier League history, and rank the ten greatest seasons the Villans have experienced at the height of English football. A key takeaway from this season was that the double-act of new signings Dion Dublin and Paul Merson were hugely important to Villa following Dwight Yorke's move to ​Manchester United. Villa actually dealt with the Trinidadian departure better than expected and topped the table in December following a 3-2 win over ​Arsenal, with Dublin scoring twice.

Alas, it wasn't to last long, as their season faltered in the second-half. The Villans narrowly missed out on Europe by two points, finishing in sixth.

This was also the first season where Gareth Barry established himself as a regular for the Midlands club, eventually going on to play 12 seasons at Villa Park. This season was more remembered for the managerial change that arguably saved Villa from going down. Brian Little resigned from the hotseat in February with the club in 15th place and dangling dangerously over the relegation zone. While former ​Chelsea boss Ruud Gullit was linked with the job, it eventually went to John Gregory, once a coach at Villa Park.

He inspired a turnaround where Villa shot up into seventh place, beating the likes of ​Liverpool and Chelsea, while also making the quarter-finals of the UEFA Cup. Moreover, the team ended up qualifying for the UEFA Cup thanks to the English FA's high UEFA Fair Play ranking. But don't tell Villa fans that the ranking was what got them into Europe... Despite excitement at the appointment of former ​Leeds United manager David O'Leary, the Villans endured a horrific start to this particular season, and were in the bottom three in mid-December.

But the team rallied and notched up 12 wins in the second-half of the season, finishing sixth and having missed out on Europe by an inferior goal difference to ​Newcastle. A semi-final appearance in the League Cup also capped off a great season for the Midlands club.

O'Leary was able to bring the best out of his players, including 16-goal top-scorer Juan Pablo Ángel who had his best season in claret colours. Darius Vassell also scored nine goals to secure his place for the 2004 Euros, where he's remembered for his penalty miss against Portugal. The league table will tell you Villa stayed consistent, in finishing sixth place for a second straight season. Yet it doesn't tell the full story, for the Midlands club were in 15th place around early December having gone through a nine-game winless run.

Yet only two losses throughout the rest of the season meant that the Villans shot up the table and managed to secure European football with 58 points, having missed out in the previous season.

A FA Cup run resulted in a final appearance at Wembley, but a howler from newly signed goalkeeper David James gifted Chelsea a 1-0 win. A drama-free season saw ​Villa never too troubled by relegation and they finished with 61 points in fifth place, seven points off the top-four. Under Brian Little, the team qualified for the UEFA Cup for a second season in a row, but through the UEFA Fair Play Ranking system

The defence was well organised by current England manager Gareth Southgate, and conceded only 34 goals, with only Arsenal having a better defensive record. A 5-0 win at home to Wimbledon was also a particular highlight of the season for the Villans.

Striker Dwight Yorke netted 17 in the league, scoring the fifth-highest number of goals in the ​Premier League that season. The first of the Martin O'Neill-managed teams that make the list, this iteration was the third-highest scoring team in the league with 71 goals. Club record-signing Ashley Young and skipper Gareth Barry chipped in with nine goals each to supplement the prolific duo of John Carew and Gabriel Agbonlahor, who shared 24 between them.

Highlights included a November where the team won every game, as well as a 6-0 away win at ​Derby County in April that was then followed by a 5-1 thrashing of city rivals ​Birmingham City at Villa Park.

The Midlands club were able to hold off ​Blackburn Rovers and Portsmouth to secure European football with a sixth place finish. Young finished with 17 assists, which was the second highest tally for any player in the league, and was rewarded with a place in the PFA Team of the Season. O'Neill's Villa gained greater squad depth in the following season, with the likes of Chelsea flop Steve Sidwell, ​James Milner and Emile Heskey joining the team. Those names joined the likes of Barry and Young to form an exciting core of English players.

And there were many memorable results during the season, whether it was winning both league games against rivals ​West Bromwich Albion or leaving the Emirates Stadium with a 2-0 win over Arsenal. Another notable moment was when Gabriel Agbonlahor netted the fastest hat-trick of the season, needing only seven minutes to put three past ​Manchester City.

The Villans finished in a solid sixth place once again and ensured qualification for the newly created Europa League. Once again, Young in particular had a terrific season, where he scored nine goals and contributed 15 assists. He was awarded the PFA Young Player of the Year award for his efforts, and was again voted into the PFA Team of the Season for a second straight season. Despite the summer departure of club stalwart Barry to Man City, Villa reloaded for the following season by bringing in Stewart Downing, ​Fabian Delph and own-goal specialist Richard Dunne.

This turned out to be Villa's most successful team of the O'Neill era, as it racked up 64 points with only eight defeats for the league season. Away wins at Anfield and Old Trafford were impressive, as were another two league wins against rivals Birmingham.

The season went so well for Villa that, remarkably, Dunne was named in the PFA Team of the Season, while it was Milner who won the PFA Young Player of the Year following his teammate in the previous season.

Throw in a FA Cup semi-final appearance and a League Cup final, and this was the most successful Villa team of the 21st century. ​It's a pretty bold move for a new manager to sell your top-scorer. And yet, that is exactly what Brian Little did when arriving at Villa Park. Out the door went Dean Saunders to Turkey and in came through Savo Milošević, as well as the arrival of Southgate from ​Crystal Palace.

For Little however, it worked out very well. A fourth-place finish in the league was complimented by a 3-0 League Cup final win over Leeds, as well as a FA Cup semi-final meant that Villa competed strongly in all three domestic tournaments.

Both defenders Ugo Ehiogu and Alan Wright were voted into the PFA Team of the Season, as the Midlands club were rewarded for their joint-second lowest goals conceded tally that season. And Yorke was terrific upfront, scoring 17 goals while creating another ten for his teammates. 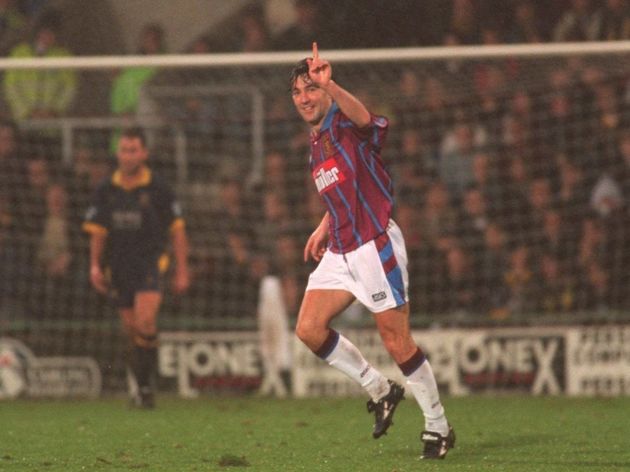 ​You have to go back to the very first Premier League season to see the last time Villa were challenging for the title. Having spent the majority of the season on top, it was with bitter disappointment that the club watched its lead over Man Utd disappear, eventually finishing ten points behind the champions.

Taking away the late collapse, this was clearly the greatest season Villa had in the Premier League. Before March, they had only lost six games all season, which was a sign of their dominance that season.

New signing Saunders, having just arrived from Liverpool for a then-club record fee of £2.5m, was key to the team, leading the way with his 13 goals. Meanwhile club legend Paul McGrath, the centre-back marshalling the Villans' backline, was awarded the PFA Player of the Year for his efforts in their title challenge.

You would have to think that this season will be the closest Villa were to winning their first Premier League for a very long time.