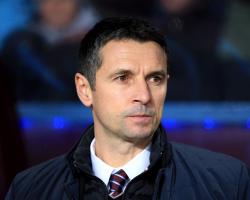 The midlands club are anchored to the foot of the top-flight table with 15 matches remaining and only picked up a point from a 0-0 draw at West Brom on Saturday when the hosts failed to register a single shot on target.

Villa are still nine points from safety despite their mini revival yet Garde thinks their recent performances have shown him they are up for their relegation fight.

"I know the last three Premier League games in terms of spirit that I can rely on these players," he said.

"It's a late step but when you arrive in a football club it takes you a little time to know people, to assess their quality as a football player and also as a human being."

Prior to their visit to The Hawthorns, Villa's last away game was the FA Cup draw at Wycombe where fans vented their anger at their players when they left the ground following a 1-1 draw with the Sky Bet League Two club.

And while neither set of supporters left West Brom that appeased on Saturday after watching a bore draw largely devoid of action, Garde hopes the travelling fans were encouraged by the effort shown.

"They saw a Villa team who fight, who had collective spirit and I just regret that we started the season very late and now it's more difficult," he added.

"But I told that as well to my players

If we keep playing with this spirit until the end of the season, everything is still possible."

Club-record signing Salomon Rondon led the line to begin with following his FA Cup winner at Bristol City in midweek and was a peripheral figure before being replaced 64 minutes in.

Pulis revealed the Venezuelan, signed from Russian club Zenit St Petersburg over the summer, may now be granted a short-term break as he is struggling to adjust to the Premier League's intensity.

"We gave him blood tests this weekend just to test him because the lad feels tired.

"I think it's a different type of football he's playing and it's week-in, week-out

It's so hard and it's so tough

He needs this season to get used to it.

"We'll check and see where he is

He might just need a couple of weeks off."