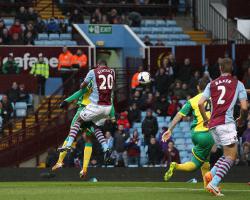 For the opening 20 minutes of this 4-1 win Villa were wretched, appearing every inch a side without a goal in their previous three matches and staring at a battle to beat the drop on the back of a miserable home record.

Coming into the game only bottom club Fulham could boast worse form on home soil, so when Wes Hoolahan, a player Villa boss Paul Lambert tried to sign during the January transfer window, scored for Norwich inside three minutes the natives became restless.

But the hosts quelled any unrest by hitting back in style, Benteke netting two in two minutes to rattle the Canaries, before a third by Leandro Bacuna and Sebastien Bassong's own goal had Villa cruising at the break.

Norwich's early goal was superbly worked, a swift build-up culminating in Hoolahan playing in Gary Hooper who checked to see if he was onside - he was by a fraction - before playing a piercing ball into the area which was turned home on the slide by Hoolahan for his first goal for almost a year.

What followed from Villa was a lack of ingenuity and passion, which resulted in boos and jeers filtering down from the stands.

When Villa woefully failed to clear their lines in the 23rd minute, gifting Nathan Redmond an effort that was driven straight at Brad Guzan, you could sense the unease and restlessness growing.

The fans had already voted with their feet, with the total of 30,303 representing their lowest in the league by some considerable margin this season.

But the game turned on Benteke's sensational 25th-minute strike.

On the half-hour the visitors were fortunate not to find themselves down to 10 men as Alexander Tettey's high studs raked the chest of Nathan Baker.

Despite left-back Baker showing three lines of nasty red marks to fourth official Chris Foy as he waited to come back on following treatment, referee Anthony Taylor only handed Tettey a yellow card.

Six minutes later Hoolahan could have had a second but was first denied by Guzan and then saw Fabian Delph clear his follow-up off the line.

That was a critical moment because within five minutes the game was out of sight as far as Norwich were concerned.

In the 37th minute Villa conjured a breathtaking breakaway as Gabriel Agbonlahor and Andreas Weimann combined to tee up Bacuna for a curled shot in off the post for his fifth goal since a summer move from FC Groningen.

And just four minutes later the game was as good as over as Bassong turned into his own net from a Delph pull-back from the byline.

It could have been 5-1 five minutes after the interval only for an unmarked Agbonlahor to head Delph's cross into the grateful arms of Ruddy from six yards.

Beyond that, aside from an 85th-minute fingertip save from Guzan to deny Hooper, the game petered out to its natural conclusion.

The home fans gave Benteke a standing ovation when he was replaced by former Norwich striker Grant Holt 10 minutes from time, and deservedly so after the Belgian's goals eased their fears.