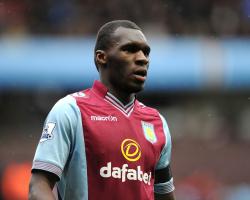 His nine league goals so far this year represent a respectable return, although compared to the 19 he managed by the end of last season he has some catching up to do.

"Christian is only a few goals behind last year," Lambert said ahead of Saturday's Barclays Premier League visit of Chelsea.

"He's not behind that tally by many but everyone thinks he's off, or out of sorts or not the same player

But his goal return is pretty decent because he missed a good month for us earlier this season.

"If he keeps the form he showed in the last game against Norwich then he'll certainly be a handful."

The Scot added: "I don't need to motivate him or talk about 'second-season syndrome'.

"We've spoken and he knows the situation

He's not naive at all, he knows exactly what's required and what he can do

His ability is there and it always has been.

"The two goals against Norwich should certainly give him more of that confidence to go and do it against Chelsea.

"He's up against two centre-halves who are playing really, really well but he did it at Stamford Bridge as well, so he knows he can do it

If him, Gabby (Agbonlahor) and Andi (Weimann) can keep their form then we'll give it a go."

Benteke did indeed show the form of last season with his brace in Villa's crucial 4-1 win against Lambert's former club Norwich last time out.

"His two goals for us were great," said the Villa boss.

He went away with the national team and that breaks up his week from here so I think he'll be in pretty good condition at the moment."

The forthcoming World Cup will no doubt be on the Belgium striker's mind but Lambert has not sat down and spoken to Benteke seriously about it.

"Not really," he said

"But you have a laugh and a joke with all the lads who are going to go there about how well they're going to do - or how bad some of them are going to be.

"So you have a laugh and a joke with them."