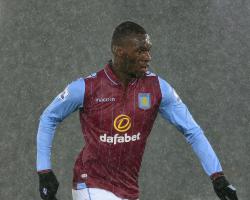 The striker volleyed in with two minutes left to end Villa's barren Christmas and score just their second goal in six games.

But poor Villa made hard work of Blackpool, bottom of the Sky Bet Championship, and were jeered by their own fans for the third straight home game.

Benteke hit the post and Shay Given saved from Andrea Orlandi and Ishmael Miller in a match of few chances as the Tangerines held their own until the death.

Villa avoided an FA Cup shock though, having lost to Millwall, Bradford, Sheffield United and Leyton Orient in cup competitions under Paul Lambert.

Wary of an upset, Benteke, Alan Hutton and Tom Cleverley started in a strong home line-up.

Murphy had been sent back to Norwich after the loanee mocked the club on social media last week.

A muted Villa Park crowd had little to shout about during a forgettable first half, with the hosts desperate and Blackpool comfortable.

Orlandi drilled a volley wide from Jamie O'Hara's corner after 27 minutes while Villa failed to muster a shot on target.

Given turned Orlandi's deflected effort wide 10 minutes before the break as the visitors grew in confidence.

Villa's final ball was woeful and the visitors' defence managed to squeeze the life out of the hosts' pedestrian attacks.

Cleverley fired well over before the break and Benteke hit the side netting but it was a dire first-half display from Villa.

Blackpool would have been very happy with the pattern of the game and Villa had their first shot on target after 62 minutes when Carlos Sanchez fired at Joe Lewis from distance.

It brought ironic cheers from the home fans and Villa nearly took the lead two minutes later when Lewis turned Benteke's volley on to the post.

It was the hosts' best chance and, seemingly inspired, they camped in Blackpool's half without making a breakthrough.

The visitors came close with nine minutes left, though, when Given turned Miller's fierce drive over at full stretch.

But brave Blackpool's resistance was ended on 88 minutes when Benteke collected Sanchez's pass on the edge of the area and volleyed past Lewis.