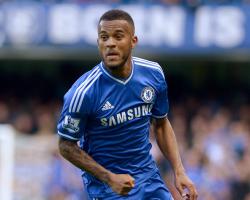 The 24-year-old joined Villa on loan from the Blues earlier this month after finding himself third in the pecking order at Stamford Bridge behind Cesar Azpilicueta and Ashley Cole.

The Londoner, who has a Champions League winners' medal and two senior England caps under his belt, is desperate to play first-team football and grabbed the chance to go out on loan once again.

He made his debut in Villa's creditable 2-2 draw at Liverpool in their last Barclays Premier League match and, ahead of Wednesday's local derby with West Brom, admits the possibility of sneaking into Roy Hodgson's squad for Brazil is never too far from his thoughts.

"I think it will be in near enough every English player's mind who is playing in the Premier League now," he said.

"As long as my form is good and I play enough games then you will always be in the hat.

"I guess it'll be down to the England manager, Roy, to judge and the fans to judge. I'm not going to say I want to be here or there or say I'm definitely going or I'm definitely not going.

"I'm just going to take each game as it comes and hopefully my performances will be good enough to be considered.

"For me personally it's just about getting the consistency and then come the summer what will be will be."

Bertrand admits he had little dialogue with Chelsea boss Jose Mourinho before making the move in search of regular game time.

"I have always looked for progression in my career," he said.

"Since I was back at Chelsea after being on loan for so long I have gone from 15 games to 20 odd to 30 odd. I couldn't see that progression again this season.

"As soon as the alarm bells started to ring I knew I needed to fix it.

"Personally we've never had any falling outs or anything but at the same time I've never had many reassurances so I thought it's in my hands now, let me take it into my own hands and get out on loan and start to play my football again."

Asked whether it was hard not to take such treatment personally, Bertrand said: "Yes I'd say so, being a human being naturally it is, kind of.

"He's in a job, he's in a profession and you just have to be professional at all times."