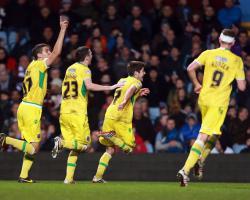 Ryan Flynn grabbed the winner with a superb 80th-minute strike just five minutes after Lambert's beleaguered Aston Villa had clawed their way back into the contest through an equaliser from substitute Nicklas Helenius.

Lambert had described the FA Cup as a "distraction" in the build-up to the match and maintained most of his fellow top-flight managers would rather do without the competition.

But despite his claims Lambert only made three changes to the side that won at Sunderland on New Year's Day - making the utterly dominant performance by Nigel Clough's Blades all the more disappointing for the home side.

Jamie Murphy had struck the visitors - currently languishing in 18th place in League One after a New Year's Day loss at Walsall - in front on 20 minutes and Villa seldom looked like finding an equaliser until Helenius's strike.

Villa's day had gone badly from the start, Nathan Baker injuring himself in the warm-up and having to be replaced by Aleksandar Tonev, and the visitors more than held their own until Murphy gave them their shock lead.

The Blades striker made the most of some hesitant Villa defending to cut in from the left flank and drill a hard low shot which appeared to take a deflection off Andreas Weimann on its way past Villa keeper Jed Steer.

The goal briefly sparked the home side into life as Matthew Lowton clattered a shot against team-mate Weimann from an Antonio Luna cross, then Benteke was inches from connecting with a cross-field ball from Fabian Delph.

But as the first half neared its conclusion it was the visitors who looked likely to grab a second goal, Tony McMahon causing problems in the Villa box with his low cross from the right, and a Murphy ball from the left blocked by Villa captain Ciaran Clark as Chris Porter lurked in front of goal.

Benteke missed two glorious chances to equalise for Villa in the final minute of the first half, twice heading horribly wide after mis-judging two crosses from Marc Albrighton.

Continuing to make a mockery of their lowly league position, the Blades started the second half in fine fashion with Flynn bringing two consecutive saves out of Villa keeper Steer.

In response, Villa were struggling to muster any sort of attacking threat and their best chance to equalise in the 55th minute had an element of fortune about it as Albrighton's cross from the right almost caught out Long.

Lambert threw on an additional striker in Helenius but the Blades continued to dominate and could have increased their lead on the hour when Steer spilled a low drive from Flynn and Villa were somewhat fortunate to be in a position to boot the ball away from danger.

Villa struggled to muster any attacking threat whatsoever until the 70th minute when Albrighton set up Benteke who toe-poked his shot straight at Long, then moments later Benteke fed Ashley Westwood whose shot from the left side of the box was scooped high and wide of target.

But the home side finally grabbed a scarcely deserved equaliser in the 75th minute when Weimann's shot in the box took a big deflection and found substitute Helenius who fired home from the left side of the box.

If Villa thought they had turned the game around the visitors had other ideas. First Porter burst into the box straight from the re-start and scooped a glorious chance just over the bar, then Flynn flashed a shot across the face of goal.

But Flynn made amends in the 80th minute with a stunning strike to put the Blades back in front, cutting across the edge of the Villa box before unleashing a mighty left-foot shot past Steer in front of the massed ranks of visiting fans.

Benteke bicycle-kicked Villa's final effort over the bar deep into injury time and the final whistle sparked wild celebrations among the visiting contingent - and boos for Lambert's men.