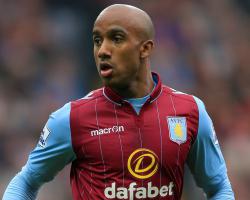 The England midfielder was out of contract at the end of the season and had been linked with a move to Liverpool.

But Delph has ended speculation on his future after Villa announced the deal ahead of Sunday's FA Cup fourth round clash with Bournemouth.

Delph told the club's official site: "The club has given me a great platform to perform and a great opportunity to showcase what I can do.

"The fans have been great with me, the chairman has been absolutely fantastic with me and I have a great relationship with the manager and I see the boys here as my brothers, my family and I am delighted to stay here.

"I am a loyal person and committing my future will hopefully show everybody what type of guy I am.

"I feel like this is me - I love the club, I love being here and I want to put 100 per cent into everything I do here

This is my club and I want to be here

That's why I am committing my future.

"Hopefully it will give everyone a bit of a lift and show the fans that we are looking to do big things here and bring excitement back to the club.

"We want to get through this season, do well and I feel the up-and-coming years will be big.

"There was no way I was going to bail out

I am here for the long run.

"The fans have been the same

I am sure they will stick with us, help us get through this season and then looking into the future, it looks promising to me."

The 25-year-old has made 116 appearances for Villa since signing from Leeds for ÃÂ£6million in 2009 and made his England debut against Norway in September.