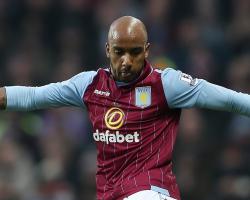 They have battled relegation for the past three seasons and American owner Randy Lerner, who has scaled back his investment, put the club on the market last year

Fox, a former chief commercial officer at Arsenal, is keen to build Villa's off-field profile to boost their revenue but acknowledged the club must be patient and not rely solely on Lerner's investment.

He said: "The game has changed significantly and financially it has moved on considerably.

"The top five clubs from a revenue perspective are in a fairly different place to where we are now.

"I think top five is going to be very difficult for us in the period of three to five years, but we can get much closer to them in five years' time

"Ultimately we want to get ourselves back into a place where we can at least see those clubs and be within touching distance of a maybe a place in Europe.

"We need to put the club in a better position though to be generating more of its own revenue.

"This is a big club and we need to be capturing more of the value from being Aston Villa Football Club than we are today.

"If we do that it takes the pressure off the owner to put nothing but his own money in, which he has done significantly since he purchased the club."

Meanwhile, Andreas Weimann believes the signing of Delph shows Villa are moving in the right direction.

Delph, whose previous contract expired at the end of the season, admitted he never considered leaving Villa on a free and wanted to repay the faith shown in him since he joined six years ago.

Villa are three points above the Barclays Premier League relegation zone after just two wins in their last 18 games ahead of Sunday's trip to Arsenal.

But Weimann believes keeping Delph is a sign of a brighter future.

"It's what they're trying to do: keep the players here, build on it

And with Fab staying it'll keep us going," said the striker

"He's not scared of anything

You see that in the way he plays, he's a really big player for us getting on the ball and keeping us moving.

"He showed it for England and us and we're glad he's staying."