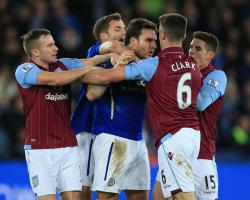 The Foxes extended their unbeaten run to four games in all competitions in front of the watching Andrej Kramaric as the striker waits to complete his club record move from Rijeka.

He saw Konchesky, who was controversially sent off at Villa last month before having the red rescinded, lash in the winner seconds before the break.

Both sides were reduced to 10 men in injury-time when Matty James and Ciaran Clark were sent off after clashing.

But only Villa goalkeeper Brad Guzan and poor finishing had stopped Leicester adding to their lead as David Nugent missed two fine chances and James and Marc Albrighton were denied.

The win failed to lift Leicester off the bottom of the Barclays Premier League, but they are just two points from safety.

Wretched Villa drew another blank - their fourth in a row in the league - to slip to 13th, three points above the bottom three.

And the visiting fans turned on manager Paul Lambert for the second game in a row, chanting for his head.

Albrighton was recalled against his former club, the winger making his first league start since October - and just second of the season - after leaving Villa in the summer.

New signing Mark Schwarzer was on the bench after arriving from Chelsea.

Guzan and Gabby Agbonlahor were recalled for Villa as Shay Given and Jack Grealish dropped out.

Leicester conjured the first chance of a quiet opening through Albrighton.

The winger's wonderful touch allowed him to scamper down the left and he slipped in a stretching Nugent, who could only stab wide from 12 yards.

Christian Benteke had the ball in the net after rounding Ben Hamer but was offside as Villa tried to force the play with little success.

Agbonlahor lashed wide, but only after Nugent had wasted another golden opening on 27 minutes.

Anthony Knockaert's teasing cross was flicked on by Leonardo Ulloa, only for his strike partner to nod wide at the far post from four yards.

While Villa looked sharper on the ball, the Foxes had created the better chances and Nugent came close again four minutes before the break.

The striker found himself in a similar position to his goal at Liverpool this month, but fired a cushioned volley against the underside of the bar - and watched Ulloa head the rebound over.

But the Foxes finally took the lead on the stroke of half-time with Konchesky's first goal of the season.

Ulloa hooked the ball across goal and Alan Hutton could only head out to the defender, who fired an 18-yard volley in off a post.

Guzan kept the visitors in the game in the early stages of the second half with fine saves from James and Albrighton.

He turned James' header over after 52 minutes before parrying Albrighton's fierce shot on the hour.

Villa, in contrast, were toothless, failing to rouse themselves after going behind and have now won just three times in 18 games in all competitions.

The anonymous Tom Cleverley fired a rare chance over from an angle with 20 minutes left and Leicester continued their profligacy when substitute Tom Lawrence shot over.

And the game sparked again in injury-time when Clark and James were dismissed.

James went in hard on Clark and the two grappled in the centre circle after squaring up before both were shown straight red cards.

The pair clashed again at the mouth of the tunnel as they went off and had to be separated by stewards and coaching staff.

Benteke then headed over at the death as Leicester hung on for a deserved win.