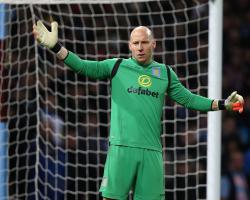 Villa fans finally turned on manager Paul Lambert at the end of last weekend's 1-0 defeat at bottom-of-the-table Leicester, demanding he be sacked.

For Saturday's Barclays Premier League clash with Liverpool, three unofficial websites have called on fans in the famous Holte End to boycott the opening eight minutes of the game as a protest at the way the club is being run.

With Villa failing to fire up front this season, scoring just 11 goals in 21 league matches and one in the last six, these appear edgy times for all at Villa as the club slides towards the relegation zone.

But Guzan, speaking earlier this week, said: "It's not about being nervous.

"It's the time of your life to be a professional footballer

We are very fortunate to do what we do.

"So it's not about nerves, it's about relishing the challenges and accepting the responsibility as players, as staff and as a club.

"We have to accept that challenge and find a way to fight through it, and that's what we're going to do.

"There's not a lack of quality or belief as we're together from the start to the finish, and we're only halfway through the year.

"There's no need to hit a panic button, no need to be worrying about relegation.

"There are 11 other teams around us fighting relegation

That speaks volumes about the quality of the league - simple as.

"It's just a matter of turning the corner, and hopefully we can do that this week."

Liverpool captain Steven Gerrard and fellow midfielder Adam Lallana have a chance of being fit.

Gerrard was withdrawn at half-time of Saturday's win at Sunderland with a tight hamstring while Lallana is ahead of schedule in his return from a thigh injury sustained on New Year's Day.

Forward Raheem Sterling is back in the squad after a being given a week off while youngster Jordon Ibe could join him having been recalled early from a loan spell at Derby.

Liverpool manager Brendan Rodgers believes his summer signings are finally emerging from an adaptation period and showing signs they can be a success at the club.

Forward Lazar Markovic was first to shine with a number of impressive cameos, culminating in the 20-year-old's maiden league goal since a ÃÂ£20million move from Benfica which beat Sunderland last weekend.

Emre Can, whose disappointing first half of the season was disrupted by injury, has found a position for himself on the right side of a back three but has shown his versatility with occasional roles in midfield.

The German, who turned 21 this week, is a product of Bayern Munich's youth system and arrived in a ÃÂ£10million deal with high expectations after one season at Bayer Leverkusen.

Rodgers believes keen Liverpool watchers are only now starting to see his potential.

"He will need a bit of time moving to a new country as a young player," said Rodgers.

"You have to remember he had only one full year of playing even though he had come through the system at Bayern Munich.

"I think he has shown his value and I think there is no doubt he will prove to be a real bargain for us.

"It was a lot of money for a young player but he is a wonderful talent, great footballer, his stature and power is well suited to the Premier League, he is two-footed, has great balance and good aggression in his game and for me is multi-functional.

"He will prove to be a player who can play in a number of positions very well here and as you have seen since he came in here he has been outstanding.

"He actually played in three positions against Sunderland: he started on the right side of a back three, we moved him up to play in the top of the midfield box and then put him back into a wide midfield role.

"It was one of the reasons we brought him here.

"He is a footballer and sometimes you find the very best footballers can play in any position and they are capable of working the game out."