Hitzlsperger reveals he is gay 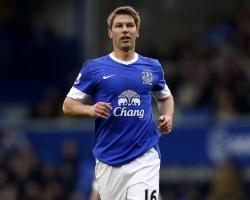 The 31-year-old, who ended his playing career in September due to persistent injuries, told Germany's Die Zeit newspaper that now was "a good time" for him to reveal his true sexuality.

"I'm coming out about my homosexuality because I want to move the discussion about homosexuality among professional sportspeople forwards," Hitzlsperger said.

The midfielder said he has only realised "in the past few years" that he would "prefer to live together with another man", saying the issue is otherwise taboo inside the dressing room.

"I've never been ashamed of the way I am," he added, although he conceded it has not always been easy to live with some of the comments dished out on the subject.

"Just picture 20 men sat around a table together drinking - you've just got to let the majority be, just as long as the jokes are halfway funny and the talk about homosexuality doesn't get too insulting," he said.

"In England, Germany or Italy, homosexuality is not taken seriously as an issue, at least not in the dressing room."

The full interview with Hitzlsperger, whose last club was Everton, will be published in the Die Zeit newspaper on Thursday.