Holt eager to prove his worth 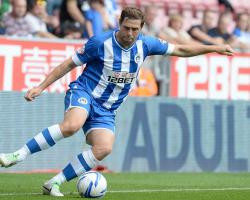 The 32-year-old dropped down to the Sky Bet Championship to join Wigan from Norwich in the summer but has endured an unhappy time with the FA Cup winners.

Holt scored just twice in 22 appearances and following the departure of manager Owen Coyle, replaced by Uwe Rosler, it seemed his days were numbered.

His loan spell at Villa Park reunites him with Paul Lambert, under whom he thrived when the pair were at Carrow Road, and Holt hopes he can repay his manager's faith in him.

"Obviously everyone has noticed I haven't been playing that much at Wigan," he told AVTV.

"It has been a frustrating year because I went to Wigan and got an injury and that has been hampering me a little bit.

"It is a massive opportunity for me, as I was in the Championship last week sitting on the bench.

"The way the last five months have gone have summed up my career to a T and how bizarre it has been: going back to the Championship and then coming back to the Premier League is just the way my career has gone and I've been very lucky.

"I see it as another chapter for me to step on again. I am sure the career I've had with the ups and downs has given me belief.

"Now it is up to me to show everyone I can get back that success I had with Norwich last season and bring it to Villa.

"I am sure with the players he (Lambert) has here it can only enhance me as a person and a player."

Holt has had plenty of success working under Lambert before, but after being linked with a move to Villa Park soon after the Scot left Carrow Road, the striker did not get his hopes up when he was again linked with a reunion.

But now he is on board, he is looking forward to the familiarities working with Lambert brings.

"When it came to the crunch and it was true, I was definitely delighted to get in," he added.

"It was something that nearly happened a couple of years ago when I was at Norwich but never really did. But thankfully he has his faith in me and has come back in.

"He gets the best out of people and there is no doubt what he did for me and a few others at Norwich shaped our careers massively.

"I know what he expects and I am looking forward to working with him.

"He has spoken to me at length and I will try to do exactly what I can for this club.

"We all know it is a team in transition. The side are young but they have held their own.

"Hopefully I can bring something different, bring some experience to help them along and help them on the pitch as well."