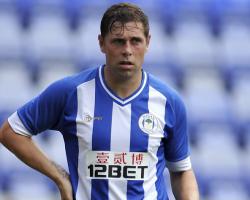 Whelan told Sky Sports News: "If he decides to go we will wish him well."

Holt has failed to impress at the DW Stadium having scored just twice and not since August.

New manager Uwe Rosler, who recently indicated that he wanted to get some of the higher earners off the wage bill, has stressed Holt will remain a Wigan player and that both clubs could benefit.

He said on Sky Sports News Radio: "This was a great opportunity for him to work under his previous manager when he got the best out of him.

"Both parties have worked very well and successfully together.

"It was too good an opportunity for Grant to turn down and we wish him all the best.

Lambert had been coy about the matter when asked after his side's 2-1 defeat by Arsenal in the Barclays Premier League on Monday.

He said: "Holty was fantastic for me at Norwich. He is a proper guy.

"I have just heard the rumours are everywhere but until something is concrete then I won't say."

Signing Holt would bolster Lambert's attacking options after a run of just one win in seven Premier League games.

He could link up with a rejuvenated Christian Benteke after the Belgian finally got back on the scoresheet after a four-month drought against the Gunners at Villa Park.

Benteke's back-post header in the 76th minute, after he had previously looked ineffective, set up a rousing finish and the Belgian himself went close to snatching an equaliser.

After trailing 2-0 following quickfire goals from Jack Wilshere and Olivier Giroud, that finish offered encouragement for both Benteke and a team that remain five points above the bottom three.

Benteke said: "It is a great feeling for me, it had been a long time.

"For my confidence it is very important but it is a shame because we lost.

"I think the lads showed great character in the second half. The way we played we have to start every game like that."

Since returning from a month on the sidelines with a hip injury in October, Benteke has looked a shadow of the player that scored 23 goals for the club last season.

Yet after diving to turn home a wicked cross from Matt Lowton, the confidence returned and he seemed a man transformed.

The 23-year-old added on avtv: "It was great cross from Matty. I was in a good place. I am happy.

"I hope this is going to help me to score more in the next few weeks. We will see.

"It was very hard for me (after the injury). It was hard to be 100 per cent and try to give all but now I feel better.

"I will keep it up and work hard and see what happens."

Villa were caught out by two moments of brilliance from Wilshere in the first half.

The England midfielder finished superbly to put Arsenal ahead after 34 minutes and then set up Giroud for the second less than 60 seconds later.

It seemed Arsenal were cruising to victory until Villa, sparked by Benteke, found their new lease of life late on.

Villa will hope Benteke can retain his new-found belief as they travel to another of the competition's high-flyers, Liverpool, next weekend.

Benteke has good memories of Anfield having scored twice there in a 3-1 win last season.

He said: "I hope I will try to do the same but it will be hard because Liverpool are on fire.

"But we showed in the second half we have to take it away and just work for the team."