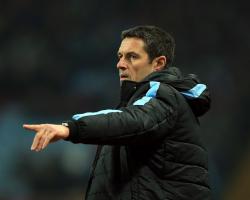 The Villa manager watched his team, consisting of nine changes from the Barclays Premier League draw against Leicester at the weekend, toil against the Sky Bet League Two promotion hopefuls in the FA Cup on Tuesday night before winning the third-round replay 2-0 courtesy of late goals

Wycombe had more than held their own against the much-changed, but still strong, Villa line-up and created the better chances before Ciaran Clark headed home with 15 minutes remaining.

Substitute Idrissa Gana sealed a fourth-round home tie against Manchester City at the end of the month with a second goal in the final minute.

Clark's opener came within two minutes of Grealish, fit again after a fortnight out with tonsillitis, being substituted.

"You saw the game," said Garde

"Jack started and it was his first for quite a long time now, but I haven't seen exactly what I wanted to see from him tonight

"I know he has played in the part of the game when we were not good collectively, when we were disappointing for the first hour or so

But then we started to play more collectively and simple

"But it's not only about Jack; I was not happy with the way the team played the first hour

We were the Premier League team but for too long tonight I did not see that."

Despite voicing his disappointment at the performance, Garde was pleased with the outcome in the end as Villa made it four games unbeaten in all competitions - the club's longest run without a defeat since December 2014

He said: "I think the result has taken a long time to come but it is fair

"Four games unbeaten now is very good but we have done nothing and won nothing, of course

But from the situation we were in the past few weeks, I prefer this one now

"It is also important for the players to have scored two goals but we have to do better than tonight if we are to keep that momentum going."

Prior to Villa's goals, Wycombe created the better chances.

Brad Guzan got down to his left to push away Sam Wood's first-time strike before a huge let off for Villa just before half-time as Guzan failed to collect Joe Jacobson's left wing cross and Garry Thompson sent his header over the crossbar.

Garde said: "I can understand the anger but it is the cup and it can be difficult

But we must improve, yes."

The Villa boss then praised Wycombe for their performances in the two games, adding: "I would like to congratulate Wycombe because they have played against us with a very good attitude and played very good football sometimes.

"I want to congratulate them, and they should be disappointed tonight."

Wanderers boss Gareth Ainsworth was proud of his players' efforts.

"They are a Premier League side with millions and millions of pounds worth on the pitch and for 70 minutes we more than matched them and in the first half we had the better chances too, but we ran out of steam I think in the end and the legs just went.

"But I'm so proud to see that effort and belief and commitment that we could achieve something here tonight and we need to take that into our league now."