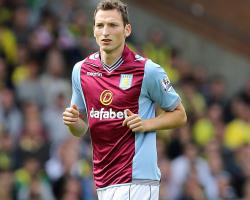 The 24-year-old, who signed for Villa in the summer, is set to undergo surgery on Friday.

The club revealed Kozak's injury in a brief statement late on Thursday night, adding that "regretfully, he will play no further part this season".

The Czech Republic international is Villa's joint top-scorer in the league this season, alongside Christian Benteke, with four goals in 14 appearances since his summer arrival from Lazio.

His absence for the rest of the campaign will, however, leave the goalscoring burden on the out-of-form Benteke.

The Belgian has not netted since a 2-1 defeat to Newcastle on September 14 and his problems in front of goal have been reflected in Villa's own lack of goals.

Paul Lambert's side have scored three goals in their past six league games, with Gabriel Agbonlahor's sole strike ending a five-game winless run at Sunderland on New Year's Day.