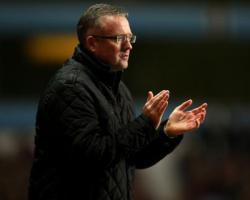 Lambert claimed this week that the tournament had increasingly become a "distraction" and that most fellow top-flight managers would probably prefer to do without it.

But after Ryan Flynn struck an 80th-minute winner to leave the Barclays Premier League strugglers reeling from the shock result of the day, Lambert insisted his comments had been taken out of context.

"If you look at my own career, I've won some nice things through cup competitions. The context of the whole interview (was missed). I was not decrying the competition at all."

Lambert had backed up his claims by making only three changes from the New Year's Day win at Sunderland but it did not stop Nigel Clough's men grabbing a shock 20th-minute lead through Jamie Murphy.

Villa struggled for much of the afternoon until substitute Nicklas Helenius hit a barely deserved equaliser on 75 minutes - only for Flynn to fire his superb winner past Jed Steer five minutes later.

Lambert added: "I am bitterly disappointed, especially after a really good win on Wednesday. I picked a really strong side to try to get through."

Referring to the reaction of the home fans who booed the team off at the final whistle, Lambert added: "The fans pay their money to come to watch and that is part of the game.

"It is up to us to give them something to be happy about and today we have not done that. Everybody knows I am not the happiest person when we lose."

Blades boss Nigel Clough sprang to Lambert's defence but added that results such as the one earned by his side prove the magic of the FA Cup is still very much alive.

Clough said: "I don't think he (Lambert) was disrespecting the FA Cup - he was just stating very honestly what the situation is like in the Premier League at the moment.

"It is just a bit sad that the FA Cup, such a wonderful competition, takes a back seat but that is the reality of it.

"For us and our 6,000 fans who came today, I think you saw how much it meant. It's still a special, special competition and we'd just like a home draw next because we've had three away games on the spin so it would be nice to get one at Bramall Lane."

Clough added: "We had a great chance just after their equaliser. The equaliser gave us that kick up the a**e and we went and attacked them again and got a deserved second goal.

"We could have come here to try to sit back but we don't want to play like that."