Lambert- I can handle criticism 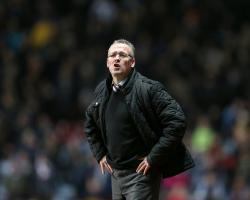 Villa's increasingly worrying home form in particular has resulted in Lambert coming in for criticism midway through his second season in charge.

Villa have failed to win any of their last six matches in front of their own fans, with the nadir a 2-1 defeat to League One side Sheffield United in the FA Cup earlier this month.

Lambert, however, is adamant he has broad enough shoulders to cope with the snipers, especially after his time as a player with Celtic and their bitter local rivalry with Rangers.

Reflecting on the comments now to then, Lambert said: "I used to walk the streets of Glasgow at times and....(exhales a deep breath). If you can handle Glasgow then you can handle a lot of places.

"Criticism is part of the game. You take it on the chin and you try and move on and learn from it. You stay level, which is important."

Crucially for Lambert, he received a resounding vote of confidence from chief executive Paul Faulkner this week, citing that he and owner Randy Lerner have absolute trust in the Scot.

That is music to Lambert's ears as he said: "It's always good to get support from people.

"But I've never lost my focus. Everybody knows football - one minute you are up, the next you are down.

"Very rarely do you get an even keel. It's just learning to live with that kind of situation. The more experience you get and the older you get, you live with the situation."

Although Villa's away record is far better than that at home this season, they face a tough task in their latest Barclays Premier League quest at Liverpool on Saturday.

Lambert and Reds boss Brendan Rodgers are good friends, and he feels Liverpool could finally claim a first Premier League title this season.

"They've a chance, no two ways about it," said Lambert.

"Brendan's a really good guy who did well at Swansea and has enhanced Liverpool.

"In my era, Liverpool dominated everything with Kenny (Dalglish) and those guys.

"Now whether they can win it this year, I don't know, but they are certainly in with a shout.

"With Luis Suarez, he is probably one of the top players in Europe right now, with the way he has been performing, the way he is playing, the confidence.

"Everything he does comes off. He was a top player last year, but he seems to have gone up to another level this season."

Lambert will at least have two new faces on show to bolster his squad in striker Grant Holt and defender Ryan Bertrand, signed this week on loan until the end of the season from Wigan and Chelsea respectively.

"Holt was a no-brainer for me," said Lambert.

"For the three years he was with me at Norwich he was fantastic. He was a big character. I know what I'm going to get, I know what he can give to the club, and I think he'll surprise a few people.

"As for Ryan, he brings a lot of big-game experience, not only in the league but even a Champions League final which Chelsea won, so he'll be really good for us.

"The way he plays the game, and as a person too, he'll fit in here great."

Lambert is, however, without defender Nathan Baker who suffered a concussion during Monday's 2-1 defeat at home to Arsenal which resulted in his withdrawal after 21 minutes.

Villa, meanwhile, have been ordered by a tribunal to pay Â£450,000 to Norwich for goalkeeper Jed Steer following his move in the summer.