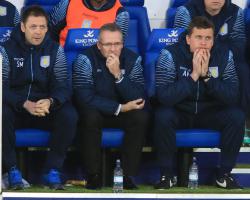 Villa went down 1-0 at resurgent Leicester and have won just twice in their last 17 Barclays Premier League games.

Paul Konchesky's winner sunk the visitors who had Ciaran Clark sent off in injury time, following Matty James' dismissal after the pair clashed.

It was Villa's fourth red card in their last seven outings and came after the visiting fans chanted "We want Lambert out" for a second game in a row.

But with Villa 13th and three points above the drop zone, Lambert insisted he will come out fighting.

He said: "It is a great club and has a great fanbase

You have to take it and come through it

There are only two ways you will go, sink or swim, and I am certainly not going roll over.

"They pay a lot of money to come and watch and I don't want Aston Villa to keep doing what they are doing.

"I think more importantly it's the game, rather than people aiming things at myself

It's the game and we didn't do enough in the last third."

And Lambert felt Clark left referee Michael Oliver with little choice but dismiss him after he squared up to James following the Leicester man's poor tackle.

He said: "It was a bad challenge initially, Ciaran's run in to help Jores (Okore)

I think the fracas was nothing."

The Foxes are still bottom but are unbeaten in their last four games in all competitions and are just five points from 12th place in a congested table.

They are two points from the safety line and boss Nigel Pearson insisted their belief has never wavered.

He said: "The dressing room always had belief in itself - what's important is, when results are not going your way, you stay in contact and that's what we've been about until we can make changes.

"We're in the January window now and whether we can add to the squad significantly remains be seen but the point is I never doubted our ability.

"It's nice to be talking on the back of decent results."

Striker Andrej Kramaric watched the win ahead of completing what is expected to be a club-record deal from Croatian side Rijeka once he obtains a work permit.

It's difficult to obtain a work permit," Pearson said.

"He's a young man who we've followed for a long time, he's not a rabbit out of a hat - and he will add to what we already have here.

"That's what we're about - adding to the squad - we're not about replacing what we have."

The only blot was James' red card after his foul on Clark and, after the pair squared up to each other, they had to be separated as they went down the tunnel.

"I'm not prepared to make any comments on it

I will wait to see the report," Pearson added.