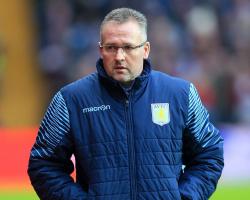 Fans are planning to empty out the Holte End at Villa Park for the opening eight minutes of this weekend's in protest at the Midlands club's results and what they see as a lack of direction regarding their team's future.

The eight minutes are to represent American owner Randy Lerner's eight years of ownership of the club, with the proposed return to their seats for the remaining 82 minutes a nod to Villa's greatest triumph -- their 1982 European Cup success.

Villa are without a victory in their last six league matches, claiming three points from a possible 18 -- and are the lowest scorers in all four divisions in England with just 11 goals.

"I understand the fans' frustrations, but we'll have a better chance of winning a game of football if they don't do it, if they stick with the lads, no matter how hard it gets at times," Lambert said.

"When the stadium is behind the players it's a great place to play football, and we've a better chance of winning if they don't do it.

"Whoever has planned it, I hope the guy next to them tries to keep them on their seat."

Some Villa have supporters have called for Lambert to be sacked in their last two matches, with last weekend's 1-0 loss to bottom club Leicester City leaving the claret and blues just three points above the relegation zone.

I'm human, like everybody else, but I'm also big enough and strong enough to handle it," added the Scot.

"What I don't want it to do is affect the players.

"The fans have been great with me up until late, and I understand their frustration, and we're doing everything to turn it around."

Villa are struggling in central defence with Ron Vlaar (knee) and Philippe Senderos (calf) both out injured while Ciaran Clark serves a one-match ban after he was sent off ay Leicester.

Meanwhile, Liverpool manager Brendan Rodgers has insisted Dejan Lovren will prove his worth as he considers recalling the centre-back against Villa.

The Croatia international moved to Anfield from Southampton for a transfer fee in the region of ÃÂ£20 million ($30 million, 26 million euros) but has struggled to find his form with the Reds.

A groin injury has meant Lovren has not started a game since December 17 at Bournemouth, although he returned as a half-time substitute in Liverpool's 1-0 win over Sunderland last time out.

"It's never easy and we've seen it over many years at the big clubs, players that come in -- some will settle in straight away and some will take that little bit of time," Rodgers said.

Over the coming months and years, he'll show what a top player he is."

Even though Villa have struggled to score goals this season, Rodgers remains wary of their defensive solidity and acknowledges Liverpool will have to take their chances.

"Villa may not score a lot of goals, which has been highlighted, but they don't concede many either," Rodgers added.

So it tells you everything.

"We know it will be tough for us but we're on a run of four wins away from home so we've got good confidence and momentum in the team."

Liverpool will give a late fitness to test to captain Steven Gerrard who suffered a hamstring problem against Sunderland last weekend.

Rodgers will definitely be without midfield playmaker Adam Lallana and striker Daniel Sturridge who are both out until early next month with thigh injuries.