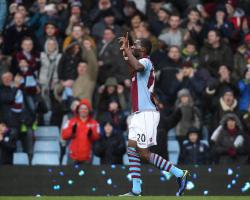 It was always going to be difficult for Benteke to replicate his spectacular debut campaign for Villa last season when he scored 23 goals following his Â£7million arrival from Genk.

Five goals in the opening five matches of this season suggested it was definitely on the cards, but then a hip injury preceded a barren 12-game run and questions were being raised about the 23-year-old.

Benteke has since responded with a further five goals in his last nine matches, including two in three minutes that helped Villa to a 4-1 thrashing of Norwich on Sunday.

The opener, to haul Villa level after Wes Hoolahan had given Norwich a third-minute lead, was a spectacular overhead volley after taking a pass from captain Ron Vlaar on his chest.

Lambert knows Benteke is a special player, but for one so young he also appreciates there is so much more to come.

"I think if he does over the second half of this season what he did last season then we're talking about having an absolute world-class player on our hands," said Lambert.

"This season was always going to be hard for him

He's only been in Britain for a year and a half, and I think people forget that, and they forget his age as well.

"He's got the ability to be a top, top player, but he's still a long, long way to go before he hits the heights of his career.

"His two goals were fantastic though."

It was a devastating spell from Villa with four goals in 16 first-half minutes killing off Norwich, as Benteke's brace was followed by two superb team goals.

"Christian's performance was great, but I thought the front three (Benteke, Gabriel Agbonlahor and Andreas Weimann) were an absolute handful the whole game," added Lambert.

"If Sebastien Bassong hadn't have scored (an own goal for Villa's fourth) then Gabby would, which would have been deserved for the way he played, and Andi was also excellent.

"The three of them I thought were back to their best.

Slowly but surely we're getting there and if we keep growing, keep being confident, then their careers will keep going.

"It's a young group and win, lose or draw, you keep them up there."

The four-goal burst followed a dry spell of 351 minutes without finding the net, not that Lambert was concerned.

"Against Cardiff (a 0-0 draw), we should have won that game, but David Marshall had one of those nights where he saved everything

He was excellent," said Lambert.

"Against Newcastle (a 1-0 defeat), there wasn't too much wrong, other than getting that little finishing touch, but against Norwich it all came together.

"We're going into the games with a lot of confidence, but we didn't look a team that was low on confidence

That was the pleasing thing.

"I knew if everything clicked then we would score, and if we continue performing that way then we are a massive threat."

The club, meanwhile, have confirmed midfielder Chris Herd will be unavailable for selection for the foreseeable future for personal reasons.

Herd, who has only made two appearances this season, has already pulled out of a training camp with Australia this week.

Australia coach Ange Postecoglou said: "We have been made aware Chris will be unavailable for selection at club level until further notice as he works through some personal issues.

"We will respect that and have replaced him in the squad for the Ecuador game."

A Villa statement read: "The club can confirm that due to personal reasons Chris Herd will be unavailable for selection until further notice.