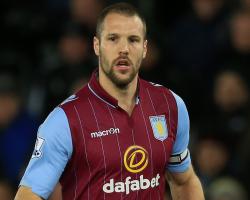 The Villa captain limped out of New Year's Day's goalless draw with Crystal Palace with a knee injury and is unlikely to return until the middle of next month.

Holland international Vlaar is out of contract at the end of the season and has been linked with a move from Villa Park but his injury has all but ruled out an early exit.

"You would think so," said Lambert

"We just have to get him back fit.

"He had his scope on Wednesday so maybe it'll be four to six weeks but it's not as bad as it could have been.

"It's the same kind of injury he had at the World Cup, he hurt it and then played in the semi final."

Jores Okore and Ciaran Clark formed a partnership in Vlaar's absence this season when he had a calf injury and Lambert has no issues throwing them back together.

"The two of them have been outstanding

To be fair to the lads we have the fifth best defensive record in the league and they have been a major part of that," he said, ahead of Saturday's Barclays Premier League trip to Leicester.

"The back four and Guz (Brad Guzan) shows you the cornerstone is pretty strong."