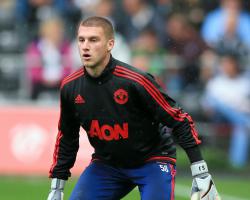 He becomes Steve Bruce's first signing for Villa, with the boss having targeted a new goalkeeper in January

"I'm really excited to be here

Aston Villa were interested and it's an opportunity I jumped at

It's one you simply can't turn down.

"I can't wait to work with Steve Bruce too

You can see his track record

"He's good for the club and I can't wait to get going now."

Pierluigi Gollini started the season as the club's first-choice goalkeeper but was replaced by Mark Bunn last month, although the former Norwich goalkeeper has kept just one clean sheet in seven games.

Johnstone is yet to make an appearance for Manchester United but has had loan spells at Scunthorpe, Walsall, Yeovil, Doncaster and Preston.

Manchester United boss Jose Mourinho stated before the transfer window opened that Johnstone will be the only player allowed to leave Old Trafford on loan in January.