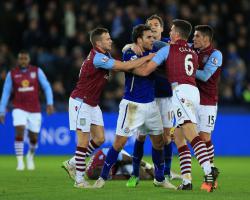 The Football Association announced the charges, which relate to a late brawl sparked by Leicester midfielder Matty James and Villa defender Ciaran Clark, in a statement on Tuesday evening.

Both clubs have until Friday to respond.

The statement read: "Both Aston Villa and Leicester City have been charged by the FA following their fixture on 10 January 2015.

"It is alleged that during added time at the end of the second half, both clubs failed to ensure their players conducted themselves in an orderly fashion and/or refrained from provocative behaviour.

The flashpoint came in injury time at the end of Leicester's 1-0 win when James went in hard on Jores Okore and Clark reacted angrily, sparking a melee in the centre circle which involved most of the players on the field

Both were shown straight red cards and clashed again at the mouth of the tunnel as they went off, having to be separated by stewards and coaching staff