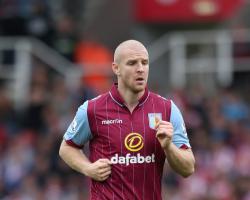 The Swiss defender, who had previously played in England for Arsenal, Everton and Fulham, joined Villa in June 2014 after a spell in Spain with Valencia.

But the 30-year-old centre-back played only nine times for Villa with his final appearance coming in a goalless draw at West Ham in November 2014.

"Aston Villa and Philippe Senderos have mutually agreed to terminate the defender's contract," said a statement on the official club website.

"The club wishes Philippe all the best in his future career."