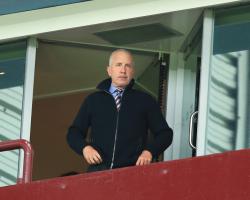 American owner Lerner has confirmed Hollis, a former deputy chairman of Birmingham Metropolitan College, as his replacement at Villa Park

Lerner had promised to step down as chairman last May if he failed to sell the club, who are bottom of the Barclays Premier League, last summer

In a statement, he said: "Regarding my future role with Villa, I expect to remain engaged with both Steve and Tom (Fox, chief executive) although at a somewhat further distance that I believe suits the reality that I live full-time in the States

"Villa's success is dependent in aggregate on the skills, determination and commitment of the manager, chief executive and chairman

I believe Steve can contribute meaningfully alongside Tom and Remi (Garde, manager) and identify opportunities that can take the club forward."

"The club needs a shake up and with Randy's continued support the board will look forward to working with Tom and Remi to help drive the changes that our fans rightfully demand and that our city can be proud of," he said

Our future success however lies in building a winning culture that is underpinned by a commitment to continuous improvement both on and off the pitch."