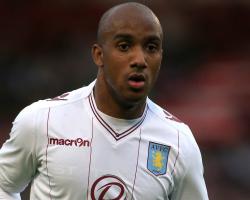 The England midfielder has penned a four-and-a-half year contract to commit himself to the club until 2019.

He was out of contract in the summer and had been linked with a move away from the Barclays Premier League strugglers, who have battled relegation for the last three years.

Boss Paul Lambert called it a coup for Villa and Delph revealed even the squad was surprised.

"The lads are absolutely delighted

As soon as I told some of them they looked at me shocked to start with," he said.

"I see them as family, brothers, I'd run through a brick wall for them

They're not just team-mates."

Villa chief executive Tom Fox played a key role in convincing Delph to stay and believes the 25-year-old has bought into his vision.

It says a lot about him too and his faith," said Fox.

"This club is on a journey and it's my job to talk to as many people and convince them it's not where we are.

"The top five clubs are in a much better place financially."