It's cruel, but it's what we've come to expect from Pep Guardiola's ruthless recruits. Their damaging loss to Norwich the week before meant someone was always going to get the backlash - it just so happened to be the Hornets.

Fantastic perfomance from everyone and the 3 points  @ManCity
So happy for my first hat-trick ⚽️⚽️⚽️ pic.twitter.com/nbgPyjXFYw

It was rage and regret that fuelled the ​Citizens' charge over the weekend, the players clearly still hurting from their humbling at Carrow Road.

Of course, not all thrashings are the result of a desire to set the record straight. Sometimes they come because one team is in blistering form, sometimes they're due to one team being absolutely dire, and often both teams are just a little bemused by how many goals actually went in.

If you like 8-0 scorelines, you're in for a treat as 90min looks at the seven biggest victories in ​Premier League history. Did club legend, inspirational captain, former world-record signing Alan Shearer get a goal versus the Yorkshiremen? No, he got five!

Prior to kick-off, the striker had urged his teammates and the supporters not to get carried away by the appointment of such a well-revered coach. Surely, even Shearer must have been a little bit excited when he grabbed a 12-minute hat-trick in the closing stages of the first-half.

That quickfire treble was sandwiched by goals for Aaron Hughes and Kieron Dyer, Gary Speed then making it six before Mr. Newcastle added a couple of cherries on top. A brace for Graziano Pelle - plus three own-goals - saw ​Southampton pulverise Sunderland in 2014. Things haven't got much better for the Black Cats in the five years that have followed.

A 653-mile round trip was always going to test Gus Poyet and his men, but no one expected them to fail quite so miserably, things starting horribly as Santiago Vergini scored one of the most extravagant own-goals in history.

His stunning volley preceded an abysmal showing from the entire Sunderland lineup as Pelle, Jack Cork, Dusan Tadic and Victor Wanyama put the northerners to the sword.

Liam Bridcutt and Patrick van Aanholt took a leaf out of Vergini's book, the youngsters also putting the ball past the demoralised Vito Mannone. Thrashing ​Watford 6-0 in May's FA Cup final would not suffice for Guardiola and City - they had to inflict more anguish on the oul Hornets.

A new Premier League record was set when Nicolas Otamendi made it a five-goal deficit in the 18th minute, while the north-west club also broke their own biggest winning margin in the top-flight.

Sergio Aguero scored for a seventh consecutive match and Bernardo Silva nabbed a maiden career hat-trick, though the standout performer was no doubt Kevin De Bruyne, who capped the victory with a fantastic strike.

The Belgian's brace of assists against the Hornets takes his seasonal tally to seven...and we're only six games in! ​Chelsea missed a penalty and still pummelled ​Aston Villa 8-0 under the temporary management of Rafa Benitez in late 2012.

Seven different players netted for the Blues, the most in the competition's history. Lampard kept things ticking over after the break, with Ramires, Oscar and Eden Hazard heaping further misery on poor old Brad Guzan in the Villa goal. There are countless ways to win the title on the final day, Aguero's stoppage-time stunner versus Queens Park Rangers proving just how dramatic things can get.

At Stamford Bridge in 2010, the only drama was Didier Drogba throwing a tantrum when designated penalty-taker Lampard took a penalty just before the break.

Drogba was neck-and-neck with Wayne Rooney for the Premier League Golden Boot, yet his treble in the second-half ensured both he and the club got what they wanted from round 38. Hat-tricks aren't particularly common in football. Perfect hat-trick are even rarer. But, how often do you see one player score the same goal thrice?

A couple of blasts helped the Englishman reach his incredible total for the afternoon after international teammate Peter Crouch had headed ​Tottenham Hotspur into a 1-0 lead at the break, Niko Kranjcar and David Bentley rounded things off with two delightful goals of their own. 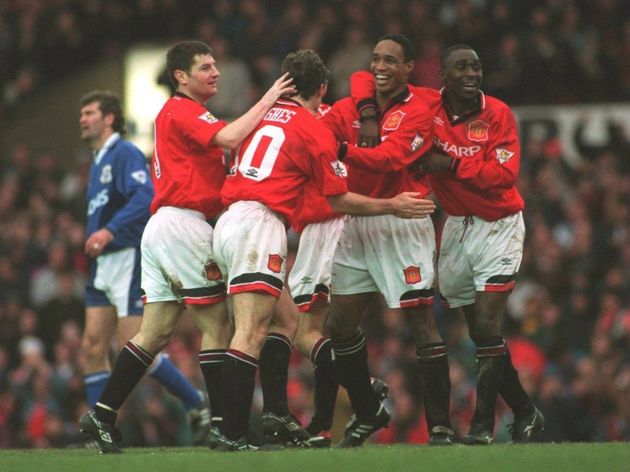 Despite what this result may suggest, ​Manchester United did not finish top of the pile in 1994/95.

Once again, five of the nine goals were scored by one individual, Andy Cole punishing Ipswich for the 3-2 defeat they inflicted on the Red Devils a few months prior.

Roy Keane, Paul Ince and Mark Hughes were also on the scoresheet at Old Trafford to secure what remains the biggest winning-margin in Premier League history. Ah, the glory days.