Villa and Palace in bore draw 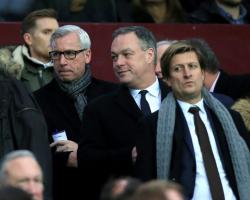 The 53-year-old is expected to become the new Palace boss after the Eagles agreed compensation with Newcastle for their former midfielder.

And he watched from the stands as Yannick Bolasie wasted the visitors' best chance when he hit the bar with just Brad Guzan to beat.

Julian Speroni saved well from Alan Hutton and Christian Benteke but it was a dour game between two limited sides.

It continued Villa's goal worries - Paul Lambert's side having scored just 11 times in 20 games - but Pardew would have been pleased by Palace's gritty outing.

The point could not lift them out of the Barclays Premier League drop zone while Villa, who have won just twice in 16 games, moved up to 12th.

The banned Fabian Delph was replaced by Leandro Bacuna while Jores Okore came in for Ciaran Clark and Gabby Agbonlahor was back after suspension for Charles N'Zogbia.

Mile Jedinak was out for Palace after linking up with the Australia squad for the Asian Cup and was replaced by Martin Kelly.

Villa started brightly and Benteke forced Speroni into a low save inside the first minute and the returning Agbonlahor then skied over.

The hosts pinned Palace back and only a fine save from Speroni denied Hutton from point blank range after Aly Cissokho cashed in on Adrian Mariappa's indecision.

But Villa suffered a blow after 15 minutes when skipper Ron Vlaar limped off with a suspected calf injury and was replaced by Clark.

And the visitors should have gone ahead after a minute later when Bolasie blew a golden chance.

The midfielder capitalised on a lucky break of the ball to run the length of the Villa half, leaving Clark for dead, but only managed to smash the bar with just Guzan to beat.

It was the last flashpoint of a dour half though with the teams cancelling each other out.

Both lacked the creativity and nous to raise the tempo of a game played at pedestrian pace.

Palace had scored just two goals in six matches while Villa had netted just once in their last four outings prior to the game so the half-time stalemate was no surprise.

Tom Cleverley's shot was deflected wide after Villa were jeered off at the break and Benteke planted a header wide as they tried to inject some much-needed excitement.

Cissokho then produced a vital tackle on James McArthur on the hour as the sides continued to cancel each other out.

But Benteke should have made it 1-0 with 19 minutes left when he arrowed a 12-yard effort over after collecting Carlos Sanchez's pass.

It summed up the game and Speroni punched Bacuna's free kick away with four minutes left in the final lacklustre action.