Villa closing in on Holt deal 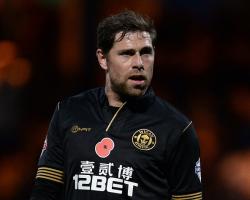 The 32-year-old is in the midlands to discuss potentially reuniting with his former Norwich boss Paul Lambert at Villa Park.

Holt joined Latics from the Canaries in the summer and scored in the club's first Championship game of the season, when they routed Barnsley 4-0.

However, he has not found the net since August and current manager Uwe Rosler recently stated he was keen to move some of his higher earners off the wage bill.

Speaking on a potential move for Holt on Monday night after the 2-1 loss to Arsenal, Lambert was coy on a possible recruitment of Holt but also praised the forward.

He said: "Holty was fantastic for me at Norwich. He is a proper guy.

"I have just heard the rumours are everywhere but until something is concrete then I won't say."