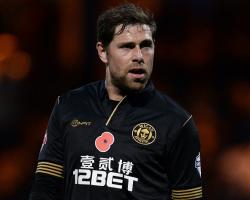 The 32-year-old is reunited with Villa boss Paul Lambert, who was the manager at Norwich for whom Holt scored 53 goals in 92 games.

Holt has scored just twice since swapping Carrow Road for the DW Stadium last summer and has not found the net since August, but Lambert hopes the forward's experience in the top flight will aid his youthful squad.

"When I knew Grant had become available it was something I wanted to pursue quickly because he'll add strength and experience to what is still a young squad overall," Lambert told Villa's official website.

"Having worked with him for three years at Norwich, I know what he can do and that's important. Coming back into the Premier League will rekindle that desire in him to succeed again at this level and, if he can replicate what he did in those three years at Norwich over these next few months here at Villa, then he'll make an impact, that's for sure.

"Grant's got some really strong attributes, he's someone who is tried and trusted and a player I've worked with before. We're looking at one or two other positions as well but this is good business for us and he'll be a really strong influence."