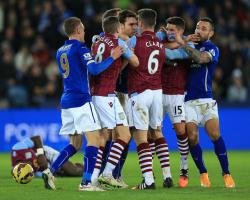 It is the second time Villa have been punished for failing to control their players in the last month after the Football Association fined them ÃÂ£30,000 following their reaction to Gabby Agbonlahor's red card against Manchester United in December.

Agbonlahor's dismissal, for a tackle on Ashley Young, was rescinded but the club were still fined.

The latest sanction happened after James and Ciaran Clark clashed at the King Power Stadium following the Leicester man's challenge on Okore.

Both James and Clark were sent off and the pair had to be separated before they made their way down the tunnel.