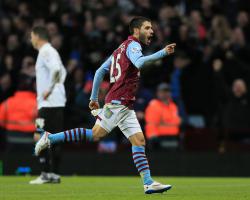 The midfielder's first goal for the club on his full debut put the hosts ahead against the battling Cherries, who troubled Villa in the first half.

Callum Wilson replied deep into stoppage time but the visitors ran out of time to mount a comeback.

The win was just the third time Villa had scored more than once this season and eased the pressure on boss Paul Lambert.

The Scot made six changes to his Villa side, Shay Given and Leandro Bacuna starting, while Bournemouth made eight changes, with just Steve Cook, Tommy Elphick and Harry Arter keeping their spots.

The hosts announced Fabian Delph's new four-and-a-half year deal before kick-off but it did not serve to inspire his team-mates.

Arter found MacDonald and he rounded Given, only for the covering Richardson to stop his weak goalbound effort.

Jores Okore mopped up and Villa immediately broke which ended with Weimann firing wide from 25 yards.

It was the hosts' last chance of a subdued first half, with Christian Benteke isolated and forced to feed off scraps.

Bournemouth were brighter as Villa struggled to gain momentum against the vibrant Cherries.

O'Kane was denied by Given before he fired over from the edge of the box as Villa hung on and Okore made a fine tackle five minutes before the break as Yann Kermorgant threatened to break through.

Bournemouth were in control, although were unable to find a breakthrough before half-time, but Villa conjured a fine chance just two minutes after the re-start.

Benteke seized on a loose pass and evaded two challenges before Gil collected the ball and fired into the side netting.

However, the Spain Under-21 international did break the deadlock on 51 minutes with a beauty

He collected the ball before cutting inside, easily beating Cook on the right, and curling a wonderful strike into the top corner from 18 yards

It was Villa's first goal in 223 minutes in all competitions and knocked the stuffing out of Bournemouth.

The Cherries did pull a goal back in injury time when Wilson tapped in from close range to end a neat move.

Ashley Westwood should have made it 3-1 a minute later but was denied by Lee Camp before Villa negotiated the last few seconds.