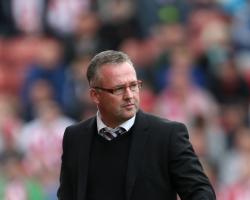 Aston Villa 0-0 Newcastle: Match Report - view commentary, squad, and statistics of the game as it happened.Stalemate at Villa ParkTen-man Newcastle registered their first point of the new Barclays Premier League season after fighting out a disappointing 0-0 draw with Aston Villa.The game at Villa Park was one of few real chances, particularly in the first half, with Magpies midfielder Remy Cabella sending one wide when he might have done better

The visitors had further opportunities just after the break, with Daryl Janmaat having a header pushed over by Villa goalkeeper Brad Guzan and firing a shot just off-target.Magpies substitute and debutant Siem de Jong was then denied by a decent Guzan save towards the end, before Mike Williamson was sent off in the dying seconds having collected two yellow cards in quick succession

While Newcastle boss Alan Pardew will take some comfort from the performance and outcome - which halted the Tyneside outfit's five-game away losing streak from the end of last season - there was little to cheer Villa manager Paul Lambert, his side rarely threatening