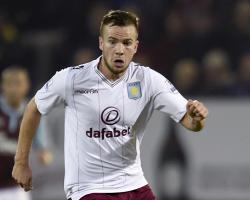 Aston Villa 0-0 Sunderland: Match Report - view commentary, squad, and statistics of the game as it happened.Ten-man Villa hold out for draw Aston Villa held Sunderland to a 0-0 draw despite going down to 10 men for the third time in four games.Fabian Delph became the third Villa player to be sent off this month when he saw red for a late foul on Jordi Gomez early in the second half.But Sunderland, who have drawn 11 times in the league, failed to cash in on their advantage, although Gomez slammed the post with three minutes left.Jack Grealish shot wide for Villa and Costel Pantilimon saved Ron Vlaar's deflected header.Nothing could separate the sides, though, and they both remain mid-table in the Barclays Premier League.Villa recalled Andi Weimann for the suspended Gabby Agbonlahor and Charles N'Zogbia was also back in for defender Jores Okore.Sunderland manager Gus Poyet dropped Sebastian Coates for Wes Brown and recalled Liam Bridcutt and Connor Wickham for the benched Lee Cattermole and Ricardo Alvarez.But Bridcutt lasted just 19 minutes before he was forced off following a blow to the head during a collision with Christian Benteke, with Cattermole replacing him.It was a dour opening period which saw Benteke shoot over and John O'Shea produce a fine take on Weimann as the striker threatened to wriggle through.Neither side took control of a scrappy, dull, game, which lacked quality and excitement.N'Zogbia fired straight at Pantilimon 10 minutes before the break in a rare moment of danger before Wickham's effort was gathered by the underemployed Brad Guzan.An underwhelmed Villa Park groaned at the addition of four extra minutes at the end of the first half but Weimann almost had them on their feet immediately after the break when he dragged a shot wide.And the game burst into life - however briefly - when Delph was sent off on 49 minutes.Gomez received a throw in and, when he played the ball back, Delph clattered into his standing ankle.It was late but not malicious from the England international and referee Martin Atkinson immediately produced the red card.He became Villa's third December dismissal after Kieran Richardson and Agbonlahor, although the latter's red was later rescinded.It changed the dynamic and Sunderland began to dominate without creating serious chances.Steven Fletcher's shot was blocked by substitute Okore before Guzan claimed Adam Johnson's low effort.Resilient Villa stood firm, although they rode their luck when Wickham's goalbound back-heel was blocked by the covering Okore on 68 minutes.Billy Jones' cross then flashed across goal as Sunderland camped in the Villa half

The bright Grealish fired a drive wide in a rare Villa opening with 16 minutes left and then Pantilimon pushed Vlaar's header wide after it hit Gomez.And the Sunderland midfielder almost won the game with three minutes left when his 20-yard effort smacked the post