​Premier League football is finally back. We saw every team play across the opening weekend of action, and there really was plenty to talk about.

Some teams looked great, others... not so much. Either way, it will have certainly been an eye-opener for managers across the country.

Here are seven things we learned from opening weekend.

Chelsea Are in for a Tough Year If it wasn't obvious already, ​Chelsea are going through a bit of a rough patch right now. ​Eden Hazard is gone, the transfer ban is in full effect, and the 4-0 humiliation at the hands of ​Manchester United on Sunday will only make things worse.

In their defence, the Blues weren't as bad as a 4-0 scoreline would suggest, but there were some glaring problems at the back. With ​David Luiz forcing through a move to ​Arsenal, Chelsea are light in defence and looked like complete strangers.

As it stands, they won't even be able to rectify their issues in the January transfer market, so it's up to Lampard to sort it out.​

Man Utd Might Have Finally Found the Winning Formula Whilst Sunday was a miserable day for Chelsea, it was the opposite for United. The Red Devils executed their game plan to perfection, with their fluid, dynamic attack tearing the Blues apart.

​Romelu Lukaku is long gone, with ​Anthony Martial and ​Marcus Rashford set to lead the line for United going forward. Both were electric at Old Trafford, and young Daniel James also helped Ole Gunnar Solskjaer's side get back to winning ways.

The dust has settled. We're ready to go again. #ncfc

In the ​Championship last season, ​Norwich City played some hugely exciting football. They may have fallen 4-1 to ​Liverpool in their opening game in the ​Premier League, but it was clear that they'll be a good watch this year as well.

Going forward, the youthful Canaries actually caused Liverpool plenty of problems and certainly deserved their goal, but their determination to attack also caused them countless problems in defence. They'll score goals and they will concede plenty, which sounds like the dream for neutral fans.

Daniel Farke knows how he wants his team to play and shows no signs of changing that. If he can work on defence, they could easily be this season's surprise package.​

Aston Villa & Sheffield United Will Be Just as Exciting Joining Norwich, ​Aston Villa and ​Sheffield United both gave good accounts of themselves following their promotion to the top flight.

Villa came close to ​stealing a win away from ​Tottenham Hotspur, thanks to some spirited defending and clinical attacking, whilst Sheffield United grabbed a well-deserved point following an emotional 1-1 draw with ​Bournemouth.

None of the newly promoted sides are guaranteed to survive in the Premier League, but it's certainly going to be fun watching them all battle to establish themselves in the top flight. Losing 5-0 against ​Manchester City is hardly the biggest shock these days, but ​West Ham United will still be hugely concerned by the manner of their defeat on Saturday.

The Hammers spent heavily on the likes of Sebastien Haller and Pablo Fornals​ this summer, but almost looked as though they were not truly prepared for the start of the Premier League season. Fitness levels were not up to scratch, and team chemistry wasn't all there either.

Their season won't be judged on this result, and there will be plenty more sides who give up five goals to the Citizens, but West Ham need to make sure this doesn't become a regular thing.

VAR Is Still as Controversial as Ever The age of the Video Assistant Referee is upon us. It was rolled out at all the weekend's Premier League games, and certainly had a busy start to life in England.

The second half of Liverpool's win over Norwich was delayed because of a technical fault with the VAR, before the controversy really began in City's victory against West Ham. Was ​Raheem Sterling's armpit offside? Does that really matter?

Admittedly, VAR got every decision right, but it comes as a real shock to the system for fans. We're living in the future now. 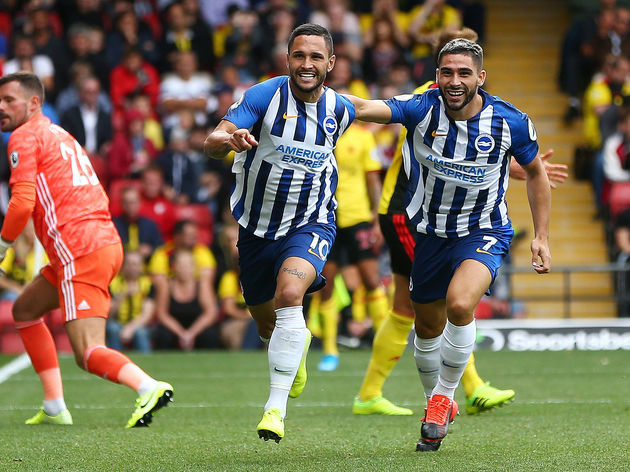 ​Brighton and Hove Albion shocked many by opting to part ways with Chris Hughton back in May​, but it was a clear sign of their desire to avoid falling into another relegation battle.

Hughton was replaced by former ​Swansea City boss Graham Potter, and the club also chose to spend heavily on Adam Webster, Leandro Trossard and Neal Maupay. Things got off to the perfect start for the Seagulls, who stormed to a 3-0 win over ​Watford.

Potter's desire for attacking football was clear when, at 1-0 up, he chose to introduce two fresh strikers in Maupay and Florin Andone. Both went on to score and prove that Brighton mean business this season.