8 Freak Injuries Which Sidelined Players Completely Out of Nowhere

​Football can be a dangerous game sometimes. Without any warning, players can get injured after colliding with an opponent, or sometimes even just running. However, there are plenty of examples of footballers getting injured in other, stranger ways.

Often, a player isn't even playing football when they pick up the injury, which usually leaves fans scratching their heads and wondering how such an injury could even be possible.

Here are eight examples of freak injuries which kept players sidelined for a while.

Adrian - Tackled by a Fan It's been a funny few weeks for Adrian. Released by ​West Ham before being picked up by ​Liverpool, he was soon thrust into the first team following an injury to Alisson, and even saved the penalty which won his side the Super Cup. And then he celebrated.

The Liverpool players all huddled up with excitement, before a fan tried to join in the fun. The supporter slipped over en route, and ultimately ended up two-footing Adrian - something which Jurgen Klopp claimed ​could keep the Spaniard on the sidelines. ​

There's almost a delicious irony in the fact that this fan, in trying to celebrate a fantastic achievement from his club, could ultimately have caused Liverpool to fall behind in the ​Premier League title race so early in the season. Next time, maybe just stay sat down? When you're playing football with your friends, there is nothing more satisfying that screaming 'GERRAAAAAARD' as you strike a volley - even if the ball almost always ends up flying into orbit. However, that's only if you're playing with a ball.

Back in 1993, goalkeeper Dave Beasant dropped a giant jar of salad cream, and instinctively tried to save it by flinging his foot at the jar. Now, you might not have noticed this, but volleying a jar isn't the same as volleying a ball.

The jar shattered into a thousand pieces, one of which ended up severing a tendon in his foot, forcing Beasant to miss around eight weeks of action. ​During his time with ​Aston Villa, Darius Vassell found himself suffering with a swollen toe. There was so much blood under his toenail and he could barely wear a sock, let alone kick a football. Sounds painful.

To try and relieve the pressure, Vassell opted to drill into his toe. Admittedly, he did use a drill which was specifically designed for such problems (and not a giant DIY drill), but it still didn't work.

Unsurprisingly, Vassell missed a number of games as his drill wound healed, and he probably just went to the doctors next time his toe hurt.

Svein Grondalen - Ran Into a Moose Now, I don't know about you, but when I'm outside, I like to keep my eyes open. Clearly, the same can't be said for Grondalen, who ran straight into a rogue moose. A moose. A whole moose.

How do you not see a moose? They're massive. Obviously, Grondalen came off worst and had to sit out Norway's next game as a result.

Sam Henderson - Hit By a Cow

Peterhead Football Club is delighted to announce that 19 year old goalkeeper Sam Henderson has signed with the club until the end of the season! #WelcomeSam #BlueToon ⚪️ pic.twitter.com/eb5qfehwZR

In the British version of Grondalen's moose attack, former Queen of the South goalkeeper Sam Henderson was forced into a spell on the sidelines after being hit by a runaway cow.

Whilst at his father's farm, the cow got loose and seemingly set its sights on Henderson, who was no match for the onrushing animal.

It's one of those that sounds really funny but, when you actually think about it, Henderson was pretty lucky to escape with just a sore shoulder.​ Football isn't dangerous at all. Sure, there might be the odd broken leg, but it's not ​nearly as scary as watching TV - just as Rio Ferdinand.

During his time with ​Leeds United, Ferdinand was giving himself a well-deserved day off by spending the whole day with his feet up in front of the TV. With his legs stretched on to his coffee table, Ferdinand found that it was actually painful to try and stand up.

It turns out that Ferdinand had actually strained a tendon in his knee. The treatment? An extended rest with his feet up. Ahead of the 1990 World Cup, Bryan Robson had been struggling with various injuries. An Achilles injury plagued his preparations, but so did a broken toe.

There are so many plausible ways for a footballer to break a toe, but Robson clearly wanted to shake it up a bit. As the story goes, he went to wake up England teammate Paul Gascoigne, and chose to do so by picking up his bed - with Gascoigne still in it.

Robson ended up dropping the bed directly onto his toe, which left him with a pretty nasty wound. But hey, I bet his screams of pain actually woke Gascoigne up.

Milan Rapaic - Waited for a Plane 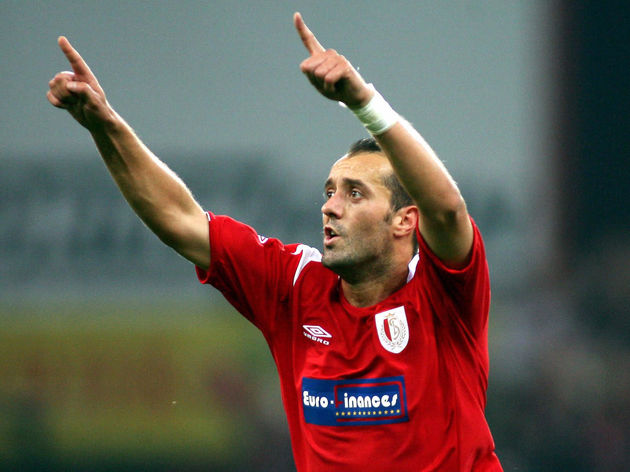 After enjoying a summer break from football, former striker Milan Rapaic was waiting for a plane to get his pre-season underway back in 1995.

Seemingly unable to contain his excitement at the prospect of returning to action, the Croatian managed to poke himself in the eye with his own boarding card, and the injury was bad enough that it actually kept him on the sidelines for the rest of the summer.

It sounds more like a ploy to extend his holidays, but the idea of it is painful nonetheless.​