A dramatic turnaround from Aston Villa was enough to earn them a 2-1 victory at Villa Park in the first leg of their play-off semi-final first leg against West Bromwich Albion.

Despite the visitors being in control for most of the game, a quickfire double late on gave Villa the advantage going into the second leg, before the Baggies' misery was compound late on when Dwight Gayle was dismissed for a second bookable offence after colliding with Villa keeper Jed Steer.

The away fans didn't have to wait long for a goal, Gayle pouncing on a defensive error to burst through and fire the ball into the bottom corner.

The Baggies looked utterly in control until the second-half introduction of Conor Hourihane. During a patient Villa attack, the Irishman held his position on the edge of the box; waited for Grealish to find him and unleashed a lethal long range effort to bring his side level.

One quickly became two for the home team, as Grealish was put through on the right-hand side, only to be brought down by Kieran Gibbs. There were few complaints from the former Arsenal man, and Tammy Abraham duly fired home from the penalty spot.

The five minute second-half spell could make all the difference for ​Villa in this tie. From looking lacklustre in attack to finding themselves ahead within a matter of minutes, the home fans were in disbelief as the tie was turned on its head.

The introduction of Hourihane proved pivotal, with Smith's side in desperate need of inspiration. They got just that when the Irish midfielder let fly from the edge of the box to level the scores. The atmosphere sky-rocketed from there as the Villa Park faithful began to believe once again.

Tammy Abraham has scored his 60th goal in English football across all competitions.

The noise from the home support appeared to consume the Baggies, as just a few minutes later, Kieran Gibbs needlessly went to ground and brought down Grealish to give Tammy Abraham the opportunity to level from the spot.

Anwar El Ghazi looked a real threat in the Villa attack, as he regularly exploited spaces in behind wing-back Mason Holgate. Unfortunately for the Dutchman, his fellow attackers were not on the same wavelength, as they struggled to make any impression on the game. The story didn't change in the second half, the home side looked most dangerous when El Ghazi was given the ball and was allowed to dribble. The winger came close to grabbing an equaliser when he unleashed a shot from 25 yards out, but saw his effort fly just over the bar.

Despite not being directly involved with either goal, you could argue that the wide man had tired out the Baggies defence all game, allowing his team mates to take advantage late on. His contribution will be needed once again on Tuesday night.

You can't help but feel ​West Brom have blown a massive opportunity to make it to Wembley after giving up a one goal lead. Despite looking defensively solid for the majority of the game, the Baggies came unstuck after a double from Hourihane and Abraham. Gibbs may feel some of the responsibility, as his needless sliding tackle gifted the opportunity to Grealish to hit the deck and earn his side a penalty, which Abraham neatly tucked away. A 2-1 away defeat would not have been the worst result coming into this tie, but the manner of defeat is sure to play on the minds of the away team.

This would have gone to Baggies forward Dwight Gayle, were it not for his needless red card five minutes from time. The English forward led the line the brilliantly and got a deserved goal after pouncing on a defensive error. However, his afternoon was soured just before the end as he picked up his second yellow card of the game. Look instead to the performance of midfield enforcer Stefan Johansen. The Norwegian, on loan from Fulham, showed his worth on Saturday afternoon as his breaking up of Villa attacks restricted the home side's offensive potential. In particular, his battle with Grealish was a tasty one, but Johansen's experience told as he always stayed on the right side of a yellow card.

​These two meet for the second half of this tie at the Hawthorns on Tuesday night, knowing that the winner will book their place at Wembley on the 27th May. For a long time, it looked as though the Baggies would have one foot in the final, only for a quickfire Villa double to completely change the complexion of this clash. 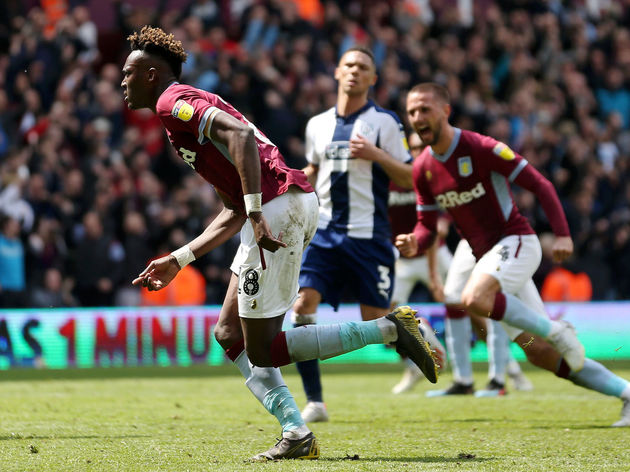 To make the task even harder for Shan's side, they will need to turn this tie around without their star striker Dwight Gayle. West Brom may look back on the forward's late red as the decisive factor in such a hotly contested semi-final.