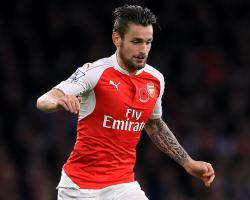 Arsenal right-back Debuchy could to be allowed to leave this month and Garde has spoken to Gunners boss Arsene Wenger about the possibility of a move.

Debuchy, 30, has made just seven appearances for Arsenal this season and played only twice in the Barclays Premier League.

"I had a conversation with Arsene a few days ago about some of the players and Mathieu Debuchy was among these players," said Garde, who played under Wenger at Arsenal.

"It's too early and it won't help me or anyone to go forward in this style to make too many more comments."

Garde refused to talk further about Loic Remy after conceding he understood why Chelsea boss Guus Hiddink was unhappy with his public statement of interest last week and insisted Jack Grealish will not go out on loan after being linked with Leeds.

Garde added: 'It's a big blow, not more, not less, than every other player

When you lose a player for 10 weeks it is huge

I wouldn't underestimate what he can give to the team, he has a profile that can be very spectacular."

But the 22-year-old failed to play under either Tim Sherwood or Garde and has returned to Liverpool, where manager Jurgen Klopp is desperate for defensive reinforcements.

Klopp has lost Martin Skrtel and Dejan Lovren to hamstring injuries while Kolo Toure (cramp) is a doubt for their FA Cup game at Exeter on Friday.

"He (Ilori) has gone back

The player was not happy about his situation at this football club and not playing," Garde said.

"When I arrived he was not totally fit, I don't know exactly what happened between August and the beginning of November

He was not always injured but he trained with me.

"It was my decision and he's gone back to Liverpool."

Alan Hutton and Carlos Sanchez (both hamstring) and Gabby Agbonlahor (back) are also due to miss Villa's FA Cup trip to Wycombe on Saturday.