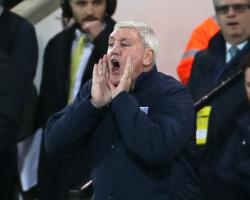 Ex-top flight referees Graham Poll and Mark Halsey have also been critical of Dean, who has been a Premier League official since 2000, this week

But despite the controversy, Bruce is happy with Dean and defended referees ahead of Villa's FA Cup third-round game at White Hart Lane on Sunday

I tried to referee this morning

All of them do a fabulous job

Yes we criticise them but it's so fast now

Human beings have got quicker, balls have, the grass is better, surfaces, everything is quicker - including referees

"They have to go through a tough training regime too, let's not forget that, especially Premier League ones

To get there you have to do a rigorous fitness programme

They have a really hard job and it's very difficult, especially now, when there's a camera at every angle

The Premier League referees for me, when you see the rest of Europe, are very, very good."

He added: "I must thank Jose Mourinho for letting me bring him here

He's just the type I think can improve."