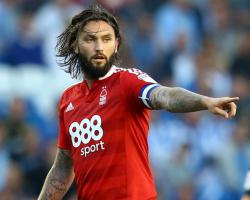 Nottingham Forest have finally given the green light for the midfielder to move to their Sky Bet Championship rivals, Press Association Sport understands

Ex-Arsenal trainee Lansbury, who joined Forest from the Gunners in August 2012, has scored six goals in 19 appearances this season

Villa are also interested in Barnsley's Conor Hourihane and Middlesbrough's Jordan Rhodes with Robbie Brady from Norwich also attracting attention from Bruce, who he worked with at Hull