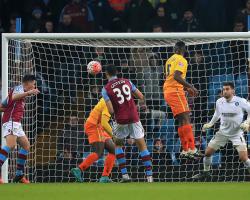 Wanderers were heroic in defeat to Liverpool that day and it was a similar story on Tuesday night.

The League Two promotion hopefuls had more than held their own against a much-changed, but still strong, Villa team and created the better chances before Clark headed home with 15 minutes remaining.

Substitute Gana sealed a fourth-round home tie against Manchester City at the end of the month with a second goal in the final minute.

Garde wanted to maintain that modicum of momentum, acknowledging in the build up to the match that last season's run to the final went hand in hand with Premier League survival - although any such repeat this time round would be nothing short of a miracle

The decision to swap so many players made picking up that momentum difficult and Villa, with teenage midfielder Jordan Lyden making his full debut, were largely kept at arm's length by Wycombe until late on

There were early chances as Rudy Gestede headed wide and Ayew jinked past his man down the right-hand side of the penalty area before sending a rising right-foot shot into the side netting, but t hat was all Villa could really muster and the best chances of the first half were created by the underdogs

Villa fashioned another half-chance at the start of the second half as Gana, on as a half-time sub for Carlos Sanchez, set Ayew on a marauding run down the right and he flashed a low shot across goal and past the far post

Villa improved afterwards with Scott Sinclair twice going close - his second effort, after a mazy run into the penalty area, was brilliantly diverted over the crossbar by Aaron Pierre's last-ditch sliding challenge

Garde's team were finally on top and Gana got his first goal for the club in the 90th minute to seal Villa's passage through and extend their unbeaten run in all competitions to four games by steering a low shot into the bottom corner of the net from inside the penalty area.