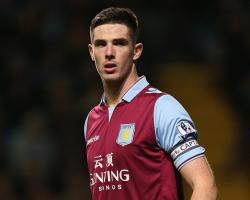 Czech Republic international Kozak, who joined Villa from Lazio over the summer and has scored four times for the midlands outfit so far, sustained the injury last Thursday, with his club subsequently announcing that he will be out for the rest of the season.

Clark told Villa's official website: "He's had his treatment and hopefully he'll come back stronger. All the lads are thinking of him. Hopefully he'll make a full recovery.

"We were playing a possession game and it was a clash of legs. No-one expected it and we thought he was going to get back up. The physio came on and knew it was a bad injury.

"I didn't sense anything was wrong and I don't think anyone did. At the time people thought it was a normal challenge.

"I don't know if it was the impact of the way his leg went but it was innocuous and no-one expected it to be as bad."