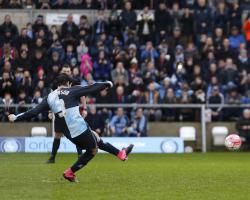 Captain Micah Richards side-footed Villa into the lead at Adams Park, only for full-back Jacobson's spot-kick to earn League Two's Wycombe a lucrative replay against their Premier League foes.

Jacobson's penalty evoked memories of his spot-kick exploits when Bristol Rovers dumped out Roy Hodgson's Fulham in their run to the FA Cup quarter-finals in 2008.

Wycombe squandered four fine openings in the first half, but refused to be overawed, keeping their composure to snatch the draw.

The 29-year-old's delay in pulling the trigger let Jores Okore slide in for just enough of a recovering block to take the sting out of the effort.

The ever-lively Gil shortly made Wycombe pay for that profligacy though, cutting in off the right and feeding Richards, lurking on the cusp of the box.

The former Manchester City defender produced a first-time finish to sit at odds with the hosts' sluggish final-third play.

Villa failed to build on that advantage however, perhaps relieved to reach half-time with the 1-0 lead.

And Bloomfield split Villa open with a fine counter-attack pass on the stroke of half-time - only for the ball to remain just out of Wood's reach.

Just when Villa expected to flex their top-flight muscle, the panicked defending which leaves them rooted to the Premier League's foot suddenly materialised.

Westwood's needless and clumsy challenge on Bloomfield gifted Wycombe a penalty - which Jacobson converted with ease.

Wood then saw a challenging volley cleared off the line by Richards as Wycombe exerted yet more pressure.

Villa settled back to the task, only for Scott Sinclair to waste a fine chance by refusing to feed Leandro Bacuna, unmarked on the penalty spot.

Rudy Gestede, anonymous for the first hour, saw a shot deflected onto the corner of post and crossbar, compounding Villa's frustrations as Wycombe held firm.