Having been beaten by both Russia and Belgium earlier this month, Scotland will now have to rely on a playoff secured by virtue of their UEFA Nations League promotion if they are reach Euro 2020 next summer – a first major tournament since 1998. 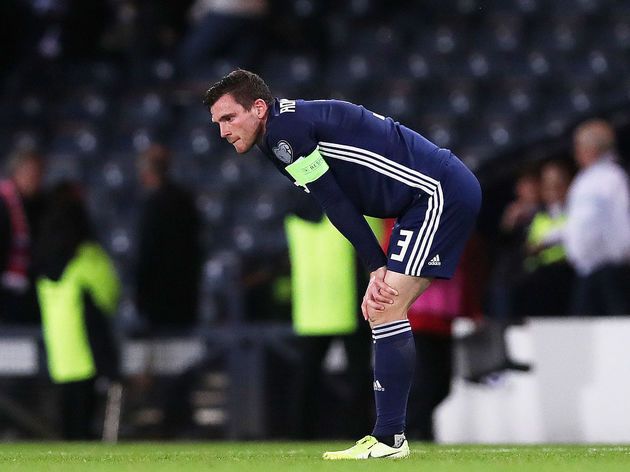 Klopp suggested it was unrealistic for people to expect Scotland to get a result against either, although the Liverpool boss clearly has time for the likes of Snodgrass, McGinn and McTominay, who play for West Ham, Aston Villa and Manchester United respectively.

“Expectations are too high. It’s not because of Robbo you don’t win. As a left-back, you can’t win a game alone. It’s just not possible,” Klopp said via the Daily Record.

“He doesn’t have to though because you have other good guys – John McGinn, what a super player he is, Robert Snodgrass, a wonderful player, Scott McTominay has great potential. So, let them play and let the manager have time to create a style of play, a Scottish style.” Robertson was a crucial part of the Liverpool side that won the Champions League last season, as well as recording the third highest points tally in Premier League history. Yet Scotland are seemingly no better off for his vast quality and that has drawn criticism.

“I see people say ‘Andrew doesn’t do for [Scotland] what he does for Liverpool.’ I can promise you if he has a big heart for us – and I know that he does – then his heart playing for Scotland is three times bigger,” Klopp argued in defence of his player.

“It’s not really my job to tell the Scottish public how to deal with a world-class player but a lot of countries have that problem. If it was an issue with the character of the player, we would have to talk but it’s not. So, Scotland, the media, the people, they have to calm down a bit.

“I heard everyone expected Scotland to beat Russia and the first question in my mind was ‘Why? [Russia] have five million more football players than Scotland! And Belgium? Well, 95 per cent of the world will lose to them.”