​Manchester City have closed the gap with Liverpool at the top of the table to just three points thanks to their 3-0 win at home to Aston Villa.

The hosts had to endure a frustrating first-half which involved more unsuccessful reviews from the Video Assistant Referee than clear-cut chances, but Raheem Sterling broke the deadlock just 20 seconds after the break with a smart finish under Tom Heaton.

City's one-goal lead was doubled when Kevin De Bruyne's cross was deflected into the back of the net by David Silva, which survived a lengthy review from VAR before the hosts were finally able to celebrate.

İlkay Gündoğan put the icing on the cake for Manchester City just moments later when he was left completely unmarked on the edge of the penalty area, firing a smart volley into the far corner of Aston Villa's net.

There wasn't enough time for a fourth goal and the game actually ended on a sour note for City after Fernandinho needlessly picked up his second yellow card in the last few minutes of the match, something which could come back to bite them next week.

Patience is a virtue. And Manchester City proved that saying to be true perfectly on Saturday.

The Premier League champions were guilty of getting frustrated throughout the opening 45 minutes, but City took the lead through Raheem Sterling with a blink and you'll miss it moment at the start of the second half. Pep Guardiola's side eventually doubled their lead and went on to cruise to pick up three points, but that was only possible as a result of City's patience throughout the game when it came to breaking through Aston Villa's defence.

It wasn't Raheem Sterling's best performance in a Manchester City shirt, but the England international stepped up to be counted exactly when his side needed him too.

The 24-year-old as bright and alert just a few seconds into the second-half to capitalise on Gabriel Jesus' header and score a vital opener, something which in turn made things easier for City to add to the scoreline through David Silva and

What a finish Raheem Sterling

The best player in the epl right now @sterling7

When Sterling has an opportunity you feel he’ll just finish it. Operating at a world class level

Why isnt Sterling in the discussion of being one of the worlds best player atm? Man is so lethal

Sterling has been the best player this season

Taking his tally for the season up to 13 already, Sterling's importance as the centrepiece of Manchester City's is becoming more obvious and he's quickly overtaking De Bruyne as the first name on Guardiola's teamsheet.

Setting up to counter-attack against the Premier League champions is hardly a revolutionary tactic, but Aston Villa did a lot more on Saturday than simply using the pace of 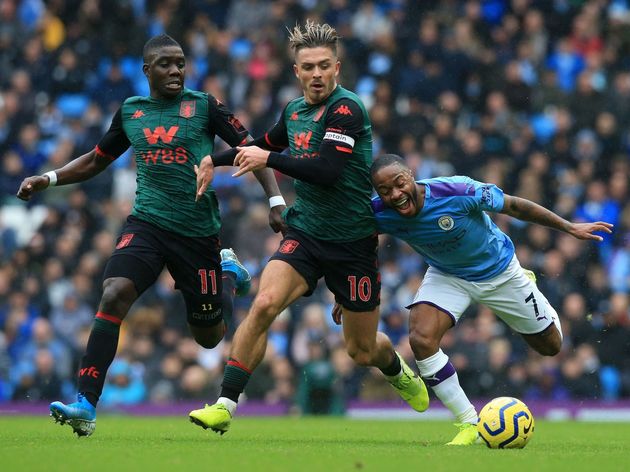 It's hardly surprising given his name, but defensive midfielder

Liking this Marvelous Nakamba for Villa the more I see him ...

Nakamba is a marvellous player.

Attention now turns to the Carabao Cup for both sides, with Manchester City hosting Southampton just days before a repeat of the same fixture in the Premier League next weekend.

Aston Villa are also at home in the cup, knowing a win against Wolves will take them into the quarter-finals of the competitions.